By analyzing the spectra of 5900 giant and supergiant stars in the Large Magellanic Cloud galaxy, NOAO astronomers Knut Olsen and Bob Blum, and their collaborators Dennis Zaritsky (University of Arizona), and Martha Boyer and Karl Gordon (Space Telescope Science Institute) found that over 5% of the stars they observed in the LMC are rotating counter to the direction of the majority of LMC stars, or perhaps in a plane that is greatly inclined to the rotation of the LMC. An ambiguity remains in the result, because the astronomers were only able to measure the projection of the stellar velocities into the line of sight, and not their full velocity vectors. In either case, these peculiar orbits indicate that these stars probably did not form from the rotating and collapsing cloud of gas that formed the LMC, a galaxy located about 160,000 light years away.

Further examination of these counter-rotating stars revealed another anomaly. The chemical composition of these stars is different. They have fewer heavy elements such as iron and calcium than typical stars in the Large Magellanic Cloud. However, their composition closely matches that of stars in another nearby galaxy, the Small Magellanic Cloud, whose stars are also depleted in these “metals”.

These two lines of evidence – motion and composition – indicated to the research team that these stars were stolen from the smaller galaxy by the gravitational pull of the larger galaxy. The astronomers used a multi-object spectrometer on the Cerro Tololo Inter-American Observatory 4-meter Blanco Telescope in Chile to observe 4600 stars. The spectrometer allowed the spectral characteristics of a large number of stars to be observed simultaneously. These observations were then combined with data on 1300 other stars to look for patterns. According to Olsen “It is not always easy to tell whether the stars in a galaxy formed in the galaxy or formed somewhere else and then were captured. Since the LMC is so close to us, we were able to observe a large number of individual stars. And to our surprise, the LMC contained a significant number of stars that must have formed elsewhere.”

The same team is also using infrared observations made with the Spitzer Space Telescope to study how stars form and evolve in the Large Magellanic Cloud. NOAO Deputy Director Bob Blum indicated the importance of this approach: “Using observations with the Spitzer Space Telescope, we were able to get a complete census of the stellar populations in the LMC. With the ground-based observations we could determine the properties and motions of a large sample of stars throughout that galaxy. By combining both, we were able to tell that some of the stars must have come from the neighboring SMC. This led us to a deeper understanding of how galaxies can and do interact, and change over time.”

This result might also help explain the unusually large amount of star formation in the LMC nebula called 30 Doradus, also known as the Tarantula Nebula due to its appearance in a small telescope. This area is on the southwestern rim of the Large Magellanic Cloud and is a current hotbed of star formation.

If the 30 Doradus region was in our galaxy and as close to us as the Orion Nebula (the nearest stellar nursery to us), it would have the area of 60 full moons in our sky and its glow would cast shadows on the ground. The 30 Doradus region is located at the position where gas from the Small Magellanic Cloud that is being pulled into the Large Magellanic Cloud along with the captured stars collides with the LMC’s own gas at high velocity. The resultant shock wave from this collision of gas pressurizes and concentrates the gas, making star formation much more likely and leading to the formation of large, unstable stars which can explode, like the famous supernova that appeared in 1987. Remnants from an older supernova have also been found in this region by x-ray telescopes. 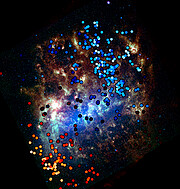