The glowing gas of the interstellar medium (ISM) is the breeding ground for the formation of new stars, and the cemetery where the ashes of dead stars ultimately return.

A team led by astronomers from the National Optical Astronomy Observatory (NOAO) has conducted a new study called the Magellanic Cloud Emission Line Survey (MCELS) that focused expressly on the ISM in the Large Magellanic Cloud and Small Magellanic Cloud—the nearest major galaxies to the Milky Way.

Hundreds of individual images from MCELS have been assembled into large mosaics of each nearby galaxy being released to the public in Washington, DC, at the annual meeting of the American Astronomical Society, in anticipation of presentations today and on Wednesday, January 11.

“Extinction of light from dust hides most of our own galaxy from view at optical wavelengths, and it is often difficult to determine distances accurately. For these reasons, we must look beyond the Milky Way to gain a global perspective on the interstellar medium,” said NOAO astronomer Chris Smith, principal investigator for MCELS. “The Magellanic Clouds provide a unique venue for studying the interstellar medium and its components on all size scales.”

The Large and Small Magellanic Clouds are neighboring patches of glowing starlight readily visible in Earth’s southern skies. They are named after Ferdinand Magellan, the Portuguese explorer who, along with other members of his 1519 expedition, were the first Europeans to sight these objects. The Large and Small Clouds are now recognized as the closest major galaxies, at distances of about 160,000 and 200,000 light-years, respectively.

MCELS data are revealing a wealth of new information about structures in the Magellanic Clouds: glowing clouds of gas that surround hot, newly formed stars; small planetary nebulae barely a light-year across; much larger shell-like remnants of stars that died as supernovae; and, giant super-shell complexes carved out by multiple supernovae, stretching thousands of light-years.

“MCELS reveals interstellar gas that has been heated and energized by stars, and so it’s an especially valuable data set for understanding how energy and matter cycle between stars and gas,” said MCELS team member Sally Oey of the University of Michigan, Ann Arbor. “This is important to us since we, and the entire Earth, are made up of material that has been cycled through ancient stars and interstellar gas.”

Carried out over five years, the survey covered the central 8 by 8 degrees of the LMC, and 3.5 by 4 degrees of the SMC, regions that include most of the gas found in both galaxies. The SMC mosaic image comprises over 500 individual images, while over 1,500 have been combined for the LMC mosaic.

In general, the team conducts its research by using the continuum images to subtract most of the stars from the images. “This technique reveals far fainter and more extensive gaseous emission,” said team member Frank Winkler of Middlebury College, Middlebury, VT, who led the assembly of the SMC image. “In fact, we can observe gaseous structures 20 times fainter than the night sky.”

“In conjunction with surveys of the Magellanic Clouds carried out at other wavelengths, MCELS will lead to a fuller understanding of processes that shape the interstellar medium, and mark the beginnings and ends of stellar lives,” said team member Sean Points of NOAO.

MCELS is also an example of the significant science that can be done by undergraduate students. Students at the University of La Serena, Chile, and at Middlebury College have played key roles in all phases of the survey, from the original observations to processing the data to assembly of the mosaic images presented at the AAS meeting. Analyses based on the survey have led to four bachelor’s degree honors theses at Middlebury and one at La Serena.

For more information on MCELS and these results, see poster 25.07 today, and special session 145 and poster session 132 on Wednesday. The new mosaic images of the LMC and SMC are on display in large format at the NOAO exhibit booth (# 500) at the AAS meeting. Digital image files are available in a variety of resolutions at Web links above.

The MCELS project has been supported in part by NSF grants AST-9540747 and AST-0307613, and through the generous support of the Dean B. McLaughlin Fund at the University of Michigan. The National Optical Astronomy Observatory is operated by the Association of Universities for Research in Astronomy Inc. (AURA), under a cooperative agreement with the National Science Foundation. 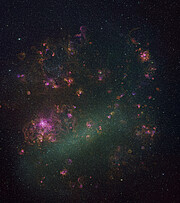