The well-known naked-eye star cluster Omega Centauri may be home to an elusive intermediate-mass black hole. Observations made using Gemini Observatory and Hubble Space Telescope provide convincing evidence that such black holes do exist and could even lead to an understanding of how they might evolve into larger supermassive black holes like the ones found at the cores of many galaxies.

To deduce the existence of the Omega Centauri black hole, astronomers Eva Noyola (Max-Planck Institute for Extraterrestrial Physics) and Karl Gebhardt (University of Texas, Austin), relied on the combined power of ground-based and orbiting instruments. Using spectra obtained by the Gemini Multi-object Spectrograph (GMOS) at Gemini South in Chile and archive images produced by the Advanced Camera for Surveys on Hubble Space Telescope, they measured the motions and brightness of stars at the heart of this massive cluster in a two-pronged approach that indicated the existence of something very massive hidden among the cluster’s stars.

Noyola’s observations, made as part of her Ph.D. thesis research under Gebhardt’s direction at the University of Texas, show that there is non-luminous matter at the center of Omega Centauri that is on the order of 40,000 times the mass of the Sun. “If it is a black hole, it’s larger than a stellar black hole but not as large as the supermassive variety,” she said.

Since supermassive black holes are well known to exist in the cores of galaxies, and stellar-mass black holes are found scattered throughout galaxies, astronomers have long sought to find conditions where black holes with masses between these two extremes could form and evolve. “If one was to find a “minuscule galaxy”, that would be a good place to look for an intermediate-size black hole,” said Noyola

According to Noyola and Gehbhardt, these kinds of black holes could turn out to be “baby” supermassive black holes. “They may be rare and exist only in former dwarf galaxies that were stripped of their outer stars,” said Gebhardt. ”They could also be more common than we expect, existing at the centers of globular clusters as well. If this is true, then they could provide numerous seeds necessary to grow supermassive black holes in the centers of larger galaxies.”

To search out for the existence of a black hole in Omega Centauri, Noyola and Gebhardt used GMOS to take spectra of stars in the very center of the cluster. Those measurements gave radial velocity information for stars in and around the location of the suspected black hole. “The advantage of using this particular instrument is that we can get velocity information in 700 mini-regions in our field of view,” said Gebhardt. “It allows us to perform more sophisticated analysis than with ordinary spectrographs.”

Noyola pointed out that the results showed a considerable rise in stellar velocities between a region near the center and the very center of the cluster. “We then used an observation of the same region made by the Advanced Camera for Surveys to help us estimate how many stars are in the central region and their masses.”

Noyola and Gebhardt calculated the expected radial velocities of the visible stars making the assumption that there was no extra matter there. Then they compared their calculations to the GMOS measurement. From that detailed analysis, they found 40,000 solar masses of non-luminous matter at the center of Omega Centauri. That object is very likely Noyola’s intermediate-mass black hole. Its strong gravitational influence is causing nearby stars to move substantially faster than stars farther away from the core. The spectra also hint that this black hole is not in an aggressive, matter-eating stage, like others found in the hearts of galaxies. “This is one of the quietest black holes found to date” said Noyola. “We see no evidence for accretion of matter in our spectra.”

Omega Centauri’s stars fall into several populations sorted by their metallicity. This indicates that the cluster’s stars were born at varying times and possibly even in different places. One appealing explanation for these differences is that Omega Centauri was once a dwarf galaxy. This ancient galaxy may have formed in two or more bursts of formation. That would explain the differing populations of stars. But, it raises another question: how did Omega Centauri go from being a dwarf galaxy to a globular cluster?

“This huge city of stars evidently passed through our galaxy, and a large percentage of its stars could have been stripped away in the process” said Noyola. “What remains is possibly the core of a former dwarf galaxy along with the black hole that once grew inside the galaxy’s nucleus.”

Searching out these elusive black holes is not easy and they haven’t been detected for a variety of reasons. “We need a certain number of stars around them in order to detect them,” said Noyola. “If they are surrounded by very few stars, they would be harder to detect (for example if the star cluster has been heavily stripped by the galaxy). On the other hand, not that many people have been looking for them. The "clues" that tell us where to look for them have only been found in the last few years, so we are only now starting to really look into different star clusters to try to find these black holes. Also, we didn't have the instruments to look for them until a few years ago.”

Gebhardt points out that if these intermediate-mass black holes turn out to be common, they will provide strong signals for the LIGO and LISA gravitational wave detectors. “Also, the existence of intermediate-mass black holes helps explain some of the “rogue stars” in our galaxy,” he said, referring to the recent discovery of a group of 10 rogue stars speeding away from the center of the Milky Way Galaxy. “Those stars have been shot out due to an interaction between the Milky Way’s supermassive black hole and a hypothesized intermediate-mass one. Thus, finding more direct evidence (like that of the rogue stars) of black holes in this mass range shows that they may actually exist in large numbers.”

Globulars are spherical collections of stars that make spectacular views even through small telescopes. A perennial favorite of skygazers, Omega Centauri is the largest globular cluster of the 158 that orbit through the Milky Way Galaxy’s halo. It lies about 16,000 light-years away in the direction of the constellation Centaurus. It is estimated to be at least 12 billion years old, slightly younger than the Milky Way Galaxy, which astronomers think is about 13 billion years old.

Omega Centauri is primarily visible in southern hemisphere skies, although it can be seen from the lower latitudes of the northern hemisphere. Look for it at RA 13 26.8 and DEC -47 29. 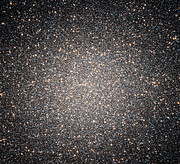