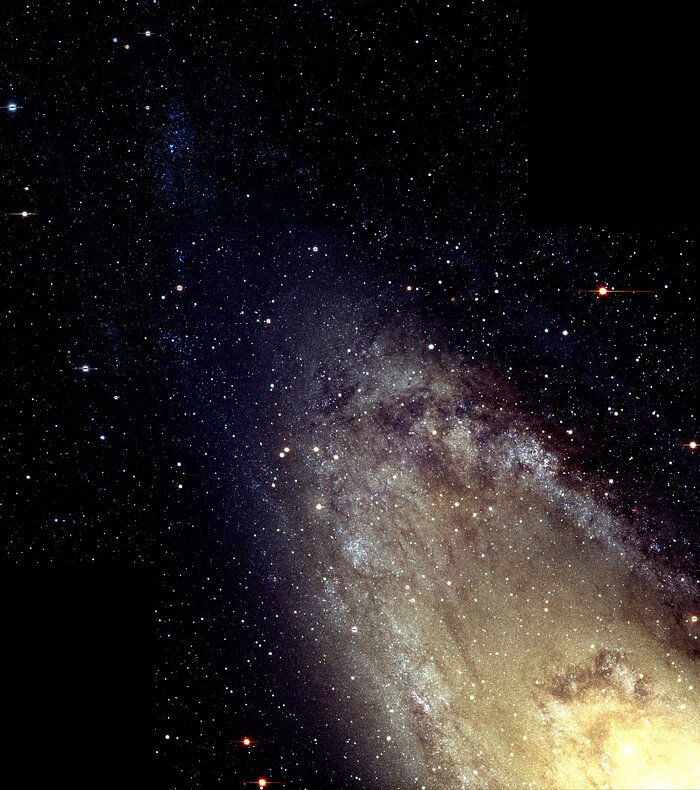 A beautifully detailed image of the northwest portion of the Andromeda galaxy, M31, demonstrates the power of an on-going sky survey project sponsored by the National Optical Astronomy Observatory (NOAO). This image of M31, the closest spiral galaxy to our own Milky Way, was taken by Phil Massey of Lowell Observatory, Flagstaff, AZ, and Nichole King of the Space Telescope Science Institute, Baltimore, as part of a survey project titled "The Resolved Stellar Content of Local Group Galaxies Currently Forming Stars." This color image shows 20 percent of the planned survey region in M31. It is constructed from two overlapping 35 arc minute x 35 arc minute fields. Blue stars are the youngest, most luminous and most massive, while yellow and red stars show a somewhat older population. The image was taken with the Mosaic CCD imager on the National Science Foundation's Mayall 4-meter telescope at Kitt Peak National Observatory near Tucson, AZ. For more details, see http://www.lowell.edu/users/massey/lgsurvey.html. This image was the subject of a press release during the 197th meeting of the American Astronomical Society held in January 2001.