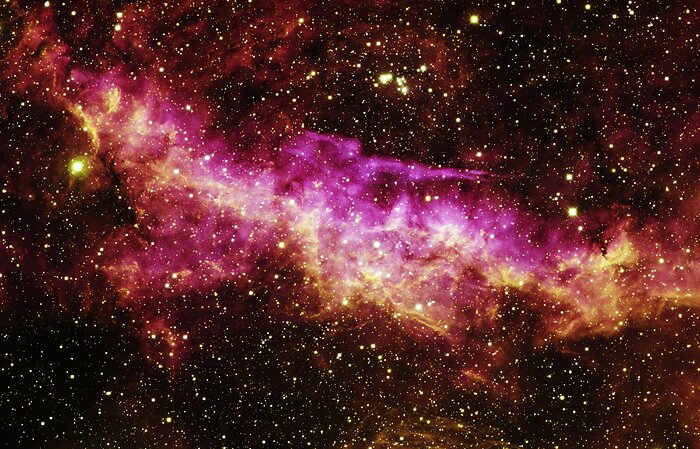 This image of Supernova 2002ic was taken at the Swope 1-meter telescope at Las Campanas Observatory in Chile on January 7, 2003. The supernova is the bright point of light in the center, at the intersection of two background galaxies. The host galaxy of the supernova is extremely faint and is not visible. A strong signal of hydrogen was detected in ground-based spectroscopic observations of the supernova, leading a team of astronomers in Chile and the U.S. to conclude that the source of this Type Ia supernova consisted of a white dwarf that suddenly exploded after gaining hydrogen gas blown off by its gravitational partner, a common asymptotic giant branch (AGB) star three to seven times as massive as the Sun. This is the first unambiguous detection of the progenitor of a Type Ia supernova. Four spectroscopic observations of SN2002ic were made using the Baade 6.5-meter and 2.5-meter Dupont telescopes at Las Campanas between November 2002 and January 2003.