Cluster of galaxies in Virgo 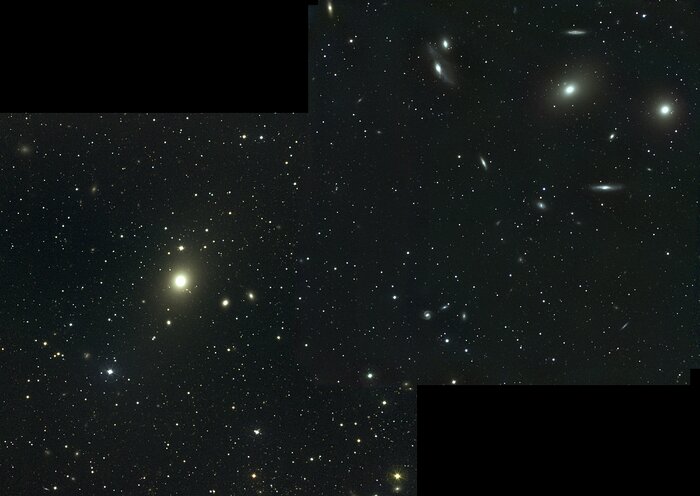 The Virgo cluster of galaxies contains over 2000 galaxies and dominates the Local Supercluster: this picture shows the western central region of the cluster. To the lower left is the giant elliptical galaxy M87, believed to be the dominant member and close to the dynamical center of the cluster. The inner regions of M87, including its well-known jet, can be seen in our close-up from the KPNO 0.9-meter telescope. The two bright elliptical galaxies on the right (west) are M86 (left-most) and M84. We have a deeper black-and-white view of this part of the cluster from the KPNO Mayall 4-meter telescope. This image needs a more detailed caption: meanwhile, you can learn a great deal about the Virgo cluster from the SEDS Web site. The Virgo cluster includes Messier galaxies M49, M58, M59, M60, M61, M84, M85, M86, M87, M88, M89, M90, M91, M98, M99, and M100. This approximately true-color picture was created from sixteen images taken in June 1995 and January 1997 using BVR filters, at the Burrell Schmidt telescope of Case Western Reserve University's Warner and Swasey Observatory located on Kitt Peak, near Tucson, Arizona. These images were of different parts of the cluster and were mosaiced together, which is why the picture is an odd shape inside the frame. The most obvious effect of this mosaicing is a change in sky noise along the boundaries where different numbers of original exposures contributed. Image size 122x86 arc minutes (yes, 2x1.5 degrees, or 12 full moons).