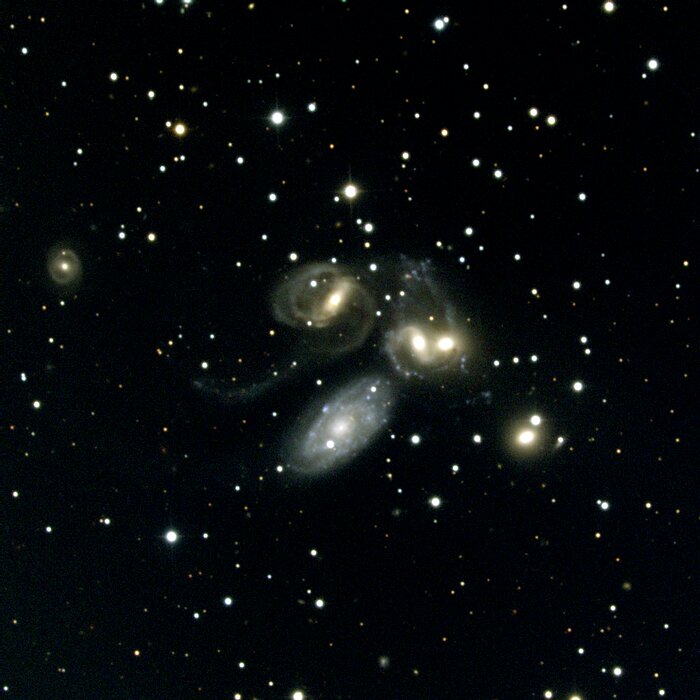 Stephan's Quintet, as its name implies, is a group of five galaxies (NGC7317, 7318A, 7318B, 7319 and 7320) in the constellation Pegasus. This unusual system has often been used as proof that the redshift is not truly a distance indicator, which would completely overturn current cosmology, because although four of the galaxies have similar, large redshifts, the fifth (NGC7320), although apparently a member of the group, shows a much smaller redshift. Conventional theory states that the low-redshift galaxy is in a nearby group (the NGC7331 group) and by coincidence appears on the sky projected against a distant background group. Opponents point to debris and tails around the low-redshift galaxy, suggesting that it is interacting with the high-redshift systems, which would require that all five galaxies be at the same physical location in space. Note that this picture includes a sixth nearby galaxy with similar redshift to the four high-redshift members of the group.he components are identified in this picture by their NGC number, with their redshift in kilometers per second given underneath each name. This picture was taken at the Kitt Peak National Observatory's 0.9-meter telescope in October of 1998 by Nigel Sharp. North is up, east is to the left.