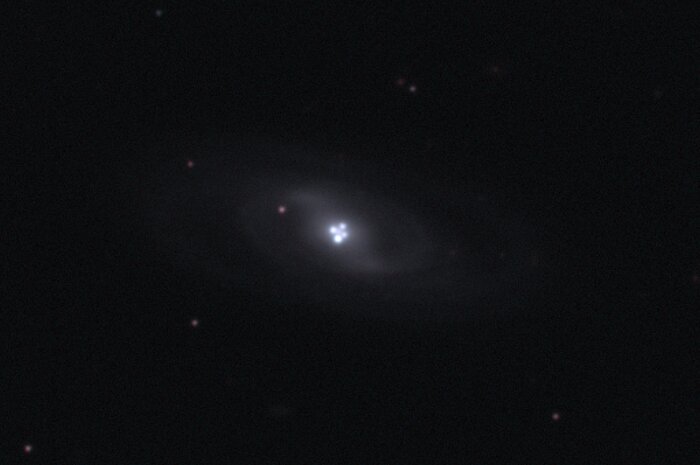 This picture of the gravitationally lensed quasar Q2237+0305 and the associated lensing spiral galaxy was taken by the 3.5-meter WIYN telescope, on the night of October 4, 1999. This system is also known as Huchra's Lens, after its discoverer, and the Einstein Cross, because it is such an excellent example of the phenomenon of gravitational lensing, postulated by Einstein as soon as he realised that gravity would be able to bend light and thus could have lens-like effects. The four separate appearances of the same redshift 1.7 quasar are created by the redshift 0.04 galaxy whose nucleus is nicely bracketed by the quasar images. It might seem surprising that such a close alignment exists, with a galaxy exactly along the line of sight from Earth to a distant quasar, but one should remember that the Universe is large enough that unlikely things happen really quite often. This is an especially important example of a gravitational lens, because the close alignment of the galaxy nucleus and the quasar mean that the four images undergo color and brightness variations with a time scale of only a day or so. These changes can be modelled theoretically and easily monitored observationally. This is a two-color picture combining red and green images, using careful processing both to reveal the strongly blue nature of the quasar, as compared to the galaxy, and to show simultaneously the very bright quasar images and the very faint structure of the lensing galaxy.