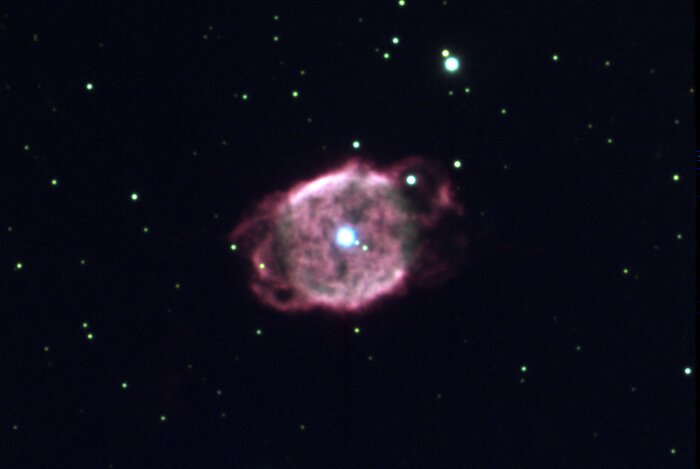 This is a combination of seven exposures through B, V and R filters taken in November of 1996 at the 3.5-meter WIYN telescope. Planetary nebula NGC40 is a low-excitation nebula in the constellation of Cepheus, about 4000 light-years away from Earth. The central star is fairly bright (about magnitude 11.6), has a mass of around 0.7 solar masses, and is much hotter than would be expected just from the properties of the surrounding nebula. This is because its temperature of around 90000 degrees should be hot enough to excite the nebula to a much higher ionization state than is found. This suggests the presence of shielding material between the star and the glowing nebula. Such higher density material could form in the shock interface between the fast wind (about 1800km/s) from the central star and the nebular shells themselves. The nebular material covers about 25% of the sky as viewed by the central star, implying rather asymmetric mass-loss from the star in its asymptotic giant branch stage. NGC40 has an extended halo, not seen here, probably caused by earlier mass ejection. Location: 00 13.0 +72 32 (2000), size: about 0.6 light-years across.