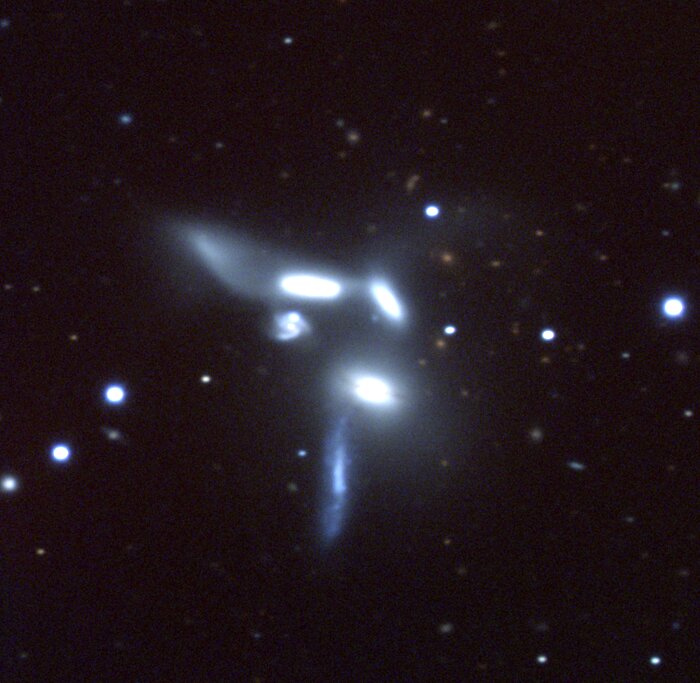 Seyfert's Sextet, a grouping of (as the name implies) six galaxies in the constellation Serpens, is an interesting example of a discordant redshift group. Five of the members show very similar redshifts, from 4000 to 4500 km/s, while the fifth is measured at nearly 20000 km/s. Conventional wisdom argues that this is a chance projection of a distant background galaxy: some would have otherwise and require a complete rethink of modern cosmology and the introduction of completely new physics.The components are identified in this picture, showing their designation in the Third Reference Catalogue of Bright Galaxies (RC3) in upper case, the different labels used by Seyfert himself, and the redshift in kilometers per second (from the RC3, as being the most accurate). Note that different authors seem to like to relabel the components (e.g. Hickson also uses a to e, but applies them to different parts of the system). This picture was taken at the Kitt Peak National Observatory's 2.1-meter telescope in July of 1998, as part of the KPNO Research Experiences for Undergraduates program, sponsored by the National Science Foundation. North is up, east is to the left.

Credit:
REU program, N.A.Sharp/NOIRLab/NSF/AURA
Usage of NOIRLab Images and Videos
Are you a journalist? Subscribe to the NOIRLab Media Newsletter.