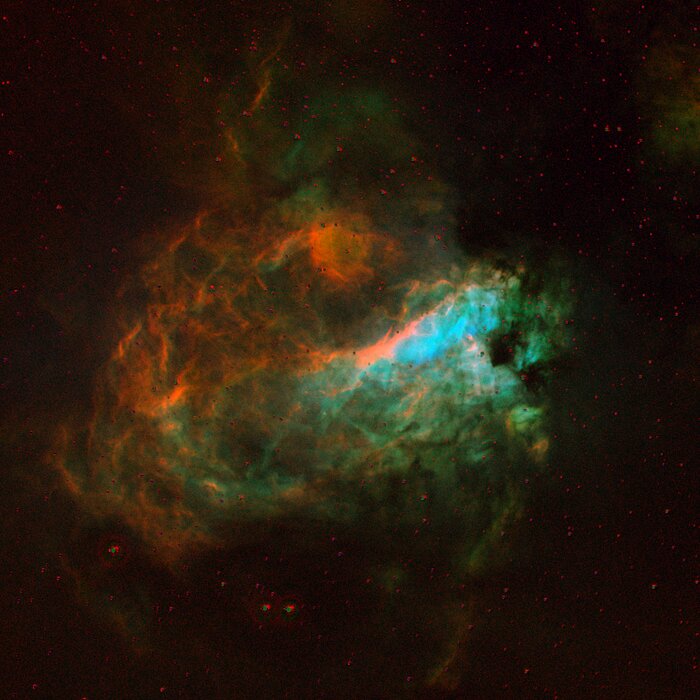 The Omega Nebula, M17 or NGC6618, in the constellation Sagittarius. M17 is a bright emission nebula excited by young stars, but with lanes of opaque dust; it is also referred to as the Swan Nebula and the Horseshoe Nebula. This image is unusual in that it was created from five frames imaged with filters covering a narrow range of wavelengths centered on the emission lines of SII (6731 angstroms), HeI (6678), H-alpha (6563), OIII (5007), and H-beta (4861). The red, green and blue contributions to the final picture come from, respectively, the ratios H-alpha/SII, SII/HeI, and OIII/H-beta. Note especially the color gradients (that is, physical condition changes) across filaments and the criss-cross effect of projection. This image was created from ten observations made at the Burrell Schmidt telescope (owned by the Warner and Swasey Observatory of the Case Western Reserve University and situated on Kitt Peak in southwest Arizona), in May 1995 during observing experience for the Research Experiences for Undergraduates (REU) program operated at the Kitt Peak National Observatory and supported by the National Science Foundation. Image size 28.8 arc minutes. We also have optical pictures from the KPNO 0.9-meter, the KPNO Schmidt, and the KPNO Mayall 4-meter telescopes, and an interesting infrared image from the 2.1-meter telescope.