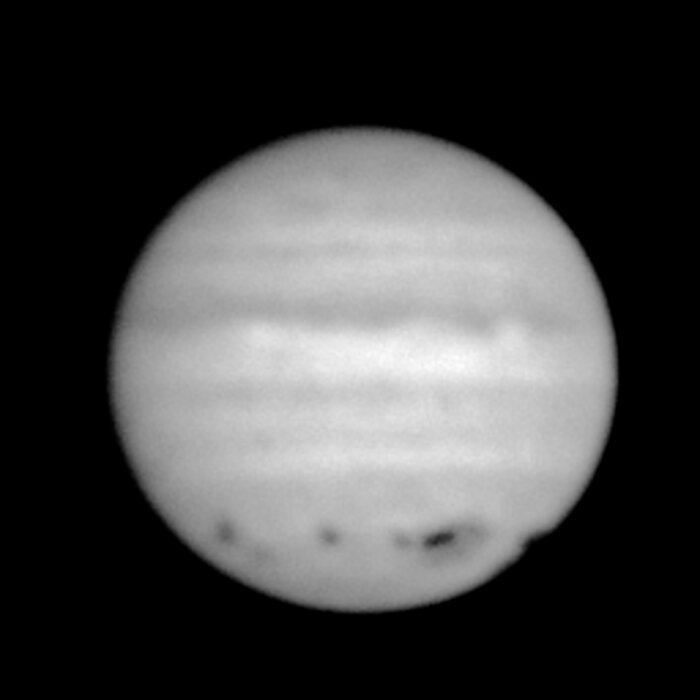 This frame of the planet Jupiter was taken in July 1994, after the planet's collision with comet Shoemaker-Levy 9. (Compare this to an image taken before the impact in early July.) It is somewhat rare to observe an object as bright as Jupiter with a 4-meter-class telescope like the WIYN, but the WIYN imager is able to open its shutter for only one tenth of a second. Other telescopes on Kitt Peak have a minimum exposure time of one second, which would have resulted in a completely saturated image. It is fortunate that such a short exposure was possible, not only to avoid saturation, but also because the telescope at that time was still being built and was not capable of tracking (i.e., following an object across the sky as the Earth rotates under us). July is not usually a good month for observing from Kitt Peak, due to the summer monsoon season, and, predictably with something as exciting as a comet-planet collision happening, 1994 was as bad as ever. On most nights the sky was completely opaque: on July 22nd, however, we managed to find a few holes with more limited cloud cover and take a few frames. The exposure time here was two-tenths of a second, so the picture should have been twice as bright. It wasn't, which will give you some idea of the cloud cover through which the WIYN telescope had to peer. As you might expect, for much the same reasons the "seeing" in this image is 1.4 arc seconds. Nevertheless, the impact "scars" are quite easy to see. This image has been "flattened", so that it has about the same brightness all the way across the planet's disk: normally, pictures of planets are much dimmer near the edges (due to physics, of course, not due to bad picture taking). Further information about the comet/planet "event" is available via the NOAO home page.

Credit:
WIYN/NOIRLab/NSF
Usage of NOIRLab Images and Videos
Are you a journalist? Subscribe to the NOIRLab Media Newsletter.