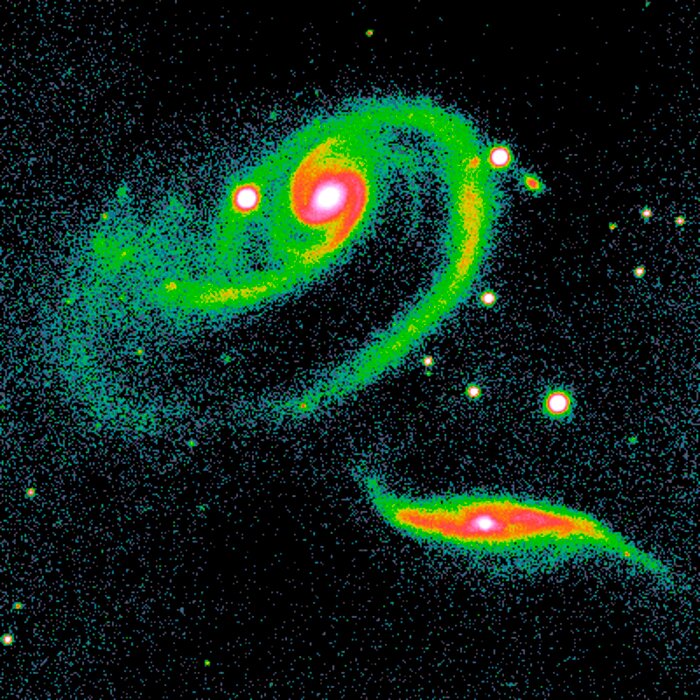 About this image This is a two-minute exposure taken on the night of September 26th 1994 (UT of observation 27/09/94:06:53) with the 1k detector. This photograph shows a region 160 arc seconds square. The brightness of the image has been converted to color (a technique called pseudo-color) in order to show the fainter regions (in dark blue to green) more clearly, while still not saturating the brighter regions (shown as red turning to white). Sky conditions during this phase of the commissioning were not ideal, and this image has a "seeing" measurement (average FWHM of several stars) of about 1.0 arc seconds. Orientation: N up, W to the left. About this object This interesting pair of interacting spiral galaxies was first described in the Catalogue of Peculiar Galaxies, compiled by Halton Arp in 1966. It is also pair number 64 in Igor Karachentsev's catalog of binary galaxies. The larger member is strongly tidally distorted, looking almost as though one side of the galaxy has been placed under a magnifying glass. The edge-on companion, however, retains a relatively undisturbed spiral disk, but has a luminous, heavily obscured but infrared-bright, star-burst nucleus. The nucleus of the large spiral, by way of a contrast, contains a low-ionization nuclear emission-line region (LINER), which is indicative of much less activity than the bright nuclear HII region of its companion. We thus see an interesting example of the very different responses that different galaxies can have to interaction with their companions: the large galaxy has a shredded disk but essentially nothing in its nucleus, while the small galaxy has an undisturbed disk but a very active nucleus. Location: 02 19.6 +39 14 (1970.0), constellation of Andromeda. Distance: approximately 200 million light-years.