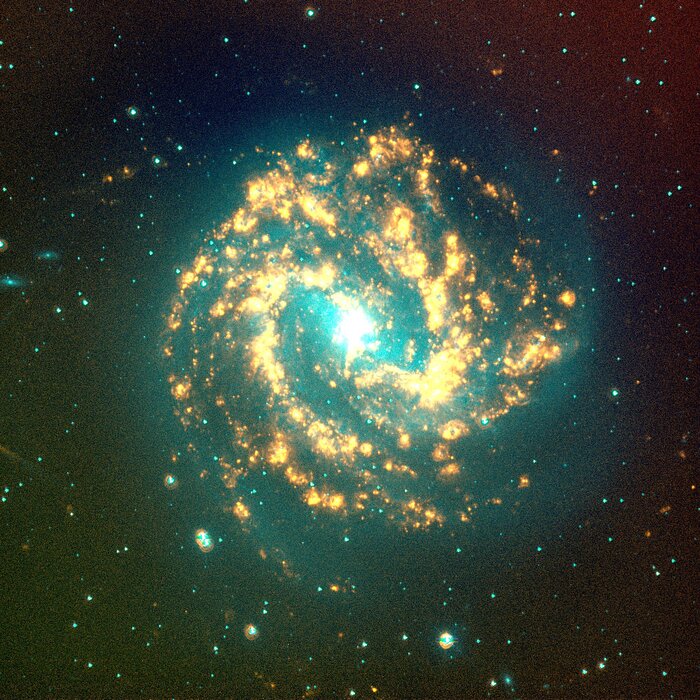 Gas-rich galaxies display a wide range of structures and properties, but one thing they all seem to have are some newly formed stars. Images from the Survey for Ionization in Neutral Gas Galaxies (SINGG), an NOAO Survey Program (obtained with the CTIO 1.5m telescope), are designed to highlight areas of star formation in gas rich galaxies. This image shows Messier 83 (M83), one of the brightest spiral galaxies. The disks of these classic galaxies (what one usually thinks of when hearing the word), form when the gas in the system collapses. The spiral pattern is caused by a density wave in the disk which can cause enhanced star formation along the arms to make a grand design spiral. M83 hosts a strong starburst in its nuclear regions which appears white in this image. The image is displayed so that stars have a cyan-blue appearance, while ionized hydrogen (H-alpha) emission appears orange-red to yellow. The H-alpha emission marks where the gas in the galaxies has been stripped of electrons, and is now recombining. It takes very hot O stars to ionize the gas; these stars have very short lifetimes (a few million years). As a result, red tones in these images typically mark the location of newly formed hot stars. Gerhardt Meurer of The Johns Hopkins University, Baltimore, MD, is the principal investigator for SINGG. For more information, see: http://sungg.pha.jhu.edu/

Credit:
The SINGG Survey Team and NOIRLab/NSF/AURA/
Usage of NOIRLab Images and Videos
Are you a journalist? Subscribe to the NOIRLab Media Newsletter.