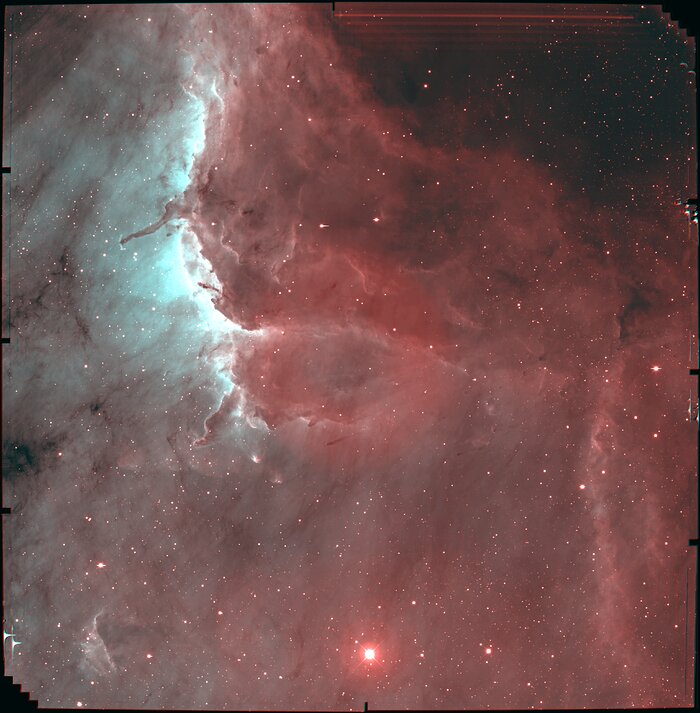 These images were obtained with the MOSAIC CCD camera at the prime focus of the Mayall 4-meter reflector, and show a 36 arc minute field of view that contains the well known Pelican nebula, located at the northwest rim of the giant HII region W80 (the North America/Pelican Nebula) in Cygnus. These narrow-band images, obtained in the red light of recombining hydrogen atoms and singly ionized sulfur, reveal a population of hitherto unrecognized shocks which trace outflows from forming stars embedded within the molecular clouds that rim the nebula. The visibility of these protostellar outflows is enhanced by the ultraviolet radiation field of several massive stars located off the image. This radiation is eroding the surrounding molecular cloud. In regions shadowed by dense clumps of gas and dust, parts of the dense and cold molecular cloud survive to produce the long pillars of dusty material. A faint jet (known as Herbig-Haro object 555) squirts out of the tip of one of the pillars, apparently indicating the presence of an unseen protostar. North is up and west is to the right in this image. This image was produced by NOAO Survey Program "Deep Imaging Survey of Nearby Star-Forming Clouds", and is the subject of a related press release. Note: the large “donut” in the middle is an artifact of the coma corrector in the KPNO 4-meter that was not completely removed in the reduction. This is the full size image complete with ragged edges revealing the dither pattern of the different fields. A clipped version at lower resolution is also available.