The Crab Nebula and Pulsar 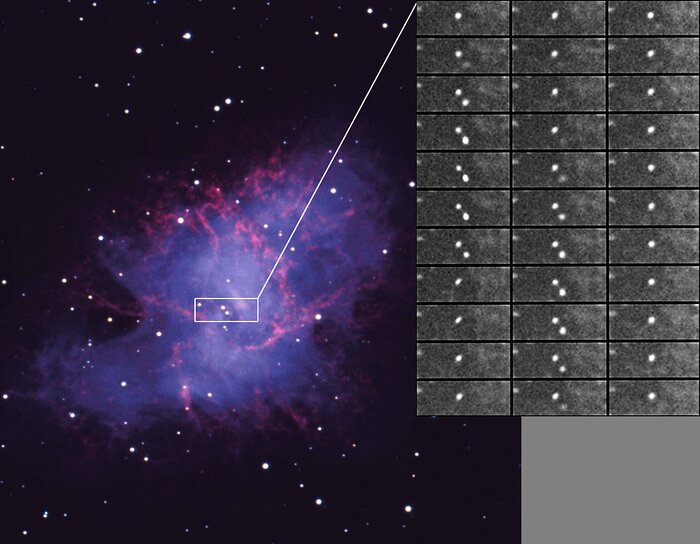 This picture shows a time sequence for the pulsar in the Crab nebula, shown in context against an image, also taken with the Kitt Peak 4-meter Mayall telescope. Both the nebula and its central pulsar were created by a supernova explosion in the year 1054 A.D. The enlarged region is a mosaic of 33 time slices, ordered from top to bottom and from left to right. Each slice represents approximately one millisecond in the period of the pulsar. The brighter, primary pulse is visible in the first column: the weaker, broader inter-pulse can be seen in the second column. An animated sequence is available as an MPEG movie (86kb) and as a flattened QuickTime movie (1Mb). These data were taken with the Kitt Peak Photon Counting Array (KPCA) at the Kitt Peak 4-meter Mayall telescope during the night of 20 October 1989, using a standard B-band optical filter, and represent a phased accumulation of almost two hours of observation. The observed period at the telescope was 33.36702 milliseconds. Due to poor weather and a long exposure seeing of more than 3.5 arc seconds, each slice was sharpened by computer image processing before making the mosaic. The KPCA was capable of millisecond time resolution for both imaging and spectroscopy, predominantly at blue wavelengths. The instrument and the pulsar observations are discussed in P.A.S.P., v104, p263, 1992. (If you need more details, please contact me.)