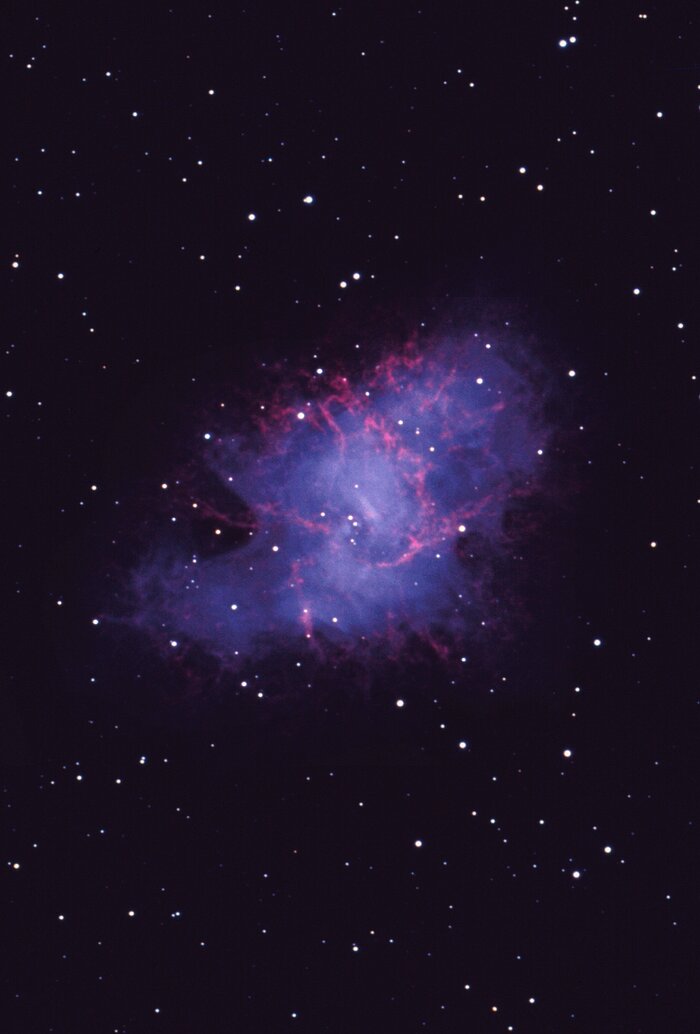 The famous Crab Nebula, Messier object 1 and NGC1952. This image of the well-known Crab Nebula was taken using Ektachrome film at the prime focus of the Kitt Peak 4-meter telescope on October 1st 1973. This is unusual because most astronomical pictures are coloured by combining three different exposures taken through red, green and blue filters. In this relatively short exposure, the pulsar is clearly visible (slightly below and to the right of the central star, which is actually a projected foreground object). North is up with east to the left. About this object The Crab Nebula was originally given this name due to its resemblance to a crab's claw (not the full-body image of a crab), in an early sketch made in 1855 by Lord Rosse's staff astronomer R.J. Mitchell. With higher resolution pictures, this appearance became far less compelling, but the name has stuck. It is the remnant of a supernova explosion in the year 1054 A.D., which was recorded in five separate accounts from Chinese astronomers in the Far East. It is perhaps odd that no western observation has survived, since it was certainly one of the most spectacular historical supernovae. The red tendrils are excited gas, emitting strong H-alpha radiation. The nebula was probably first noticed in 1731 by John Bevis, and it was significant enough to be the first entry in Charles Messier's list of nebulae (compiled to avoid mistaking them for comets). The nebula continues to expand and change the details of its appearance, and this is partly due to the violence of the original explosion. However, the star which exploded left behind a rotating neutron star, which continues to beam energy out into the nebula, as well as flashing with a period of only 33 milliseconds. The details of this energy input are important for our understanding both of neutron stars and of the physical conditions in the nebula, and are revealed in the patterns of filaments, their brightness and colors, and the way they change with time. Despite the name, it is actually in the constellation Taurus. Photograph by Bill Schoening.