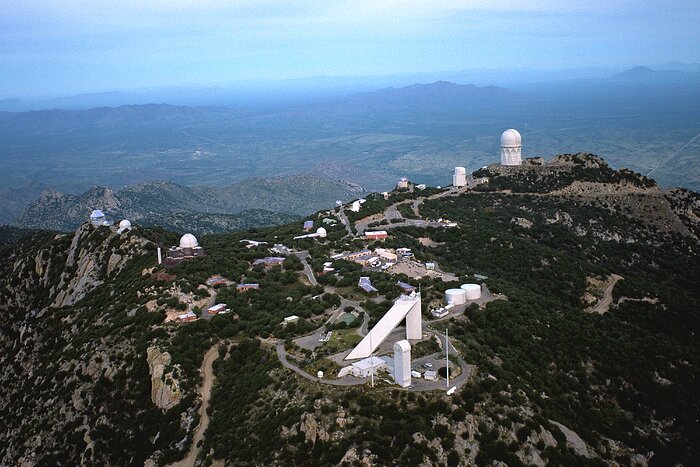 This 1993 aerial photograph of the Kitt Peak mountain, some 50 miles WSW of Tucson, Arizona, shows the current state of the large collection of telescopes maintained and operated by the National Optical Astronomy Observatories, along with some `client' telescopes owned by other groups and supported to various extents by NOAO. A variety of aerial views can be found under the facilities category. At the far right, dominating the mountain, we see the 4-meter Mayall Telescope. Its actual diameter, defined in pre-metric days, is 158 inches. Just to its left is an unusual cylindrical building, rather different from the traditional telescope dome, housing the 90-inch telescope operated by the University of Arizona. Continuing to the left, there is a 0.9-meter (36-inch) telescope operated by the University of Arizona SpaceWatch program, whose function is to find and study near-Earth asteroids. SpaceWatch has a new 1.8-meter telescope built after this picture was taken. At the far left, we see the new 3.5-meter WIYN telescope, which represents an innovative approach to the creation of new facilities. Construction was funded by Wisconsin, Indiana, and Yale Universities, with contributions from NOAO which also operates the telescope in return for 40% of the available time. This time is made available to the US astronomical community on the basis of scientific merit, as has always been the case with the NOAO telescopes. Moving to the right from the WIYN site, we see a dome which formerly housed a 16-inch telescope, which was moved to the Visitors' Center as a permanent exhibit after it stopped being used for scientific research. Instead of a small group of astronomers, it is now seen by the many hundreds of people who visit the mountain top each week. The next dome houses a 0.9-meter (36-inch) telescope, which is used mostly for imaging (many of the pictures in the NOAO collection were taken at this telescope). Moving along, there is a larger dome, accompanied by a slender tower to the left, which is home to the 2.1-meter (84-inch) telescope, used for both imaging and spectroscopy. The slender tower is part of a special auxiliary system which, coupled with a separate mirror housed in the rectangular shed visible to its right, enables spectroscopic work to be performed independently of the main telescope, when convenient, effectively making the 2.1-meter `telescope' a dual observing facility. This separate system feeds light to the Coude Spectrograph, a large instrument built into the square building underneath the mirror shed: for obvious reasons, this is known as the Coude Feed telescope. The large triangular building in the foreground is the McMath-Pierce Solar Facility, the world's largest solar telescope and containing a complex of mirrors and instruments devoted to studying our nearest star, the Sun. In front of the McMath-Pierce telescope is the Vacuum Telescope , which contains a giant vacuum chamber running almost the full height of the building, which keeps image motion to a minimum and thus enables very crisp images of the Sun. This telescope produces pictures of the magnetic field strength and other physical parameters characterising the solar surface, across the full width of the Sun's disk. In center frame, at the back of the mountain in this picture, are two more telescopes. The white dome belongs to the Burrell Schmidt telescope of the Case Western Reserve University's Warner and Swasey Observatory. The silver dome is the 0.9-meter telescope of the Southeastern Association for Research in Astronomy (SARA), intended eventually to be a fully automated, computer controlled facility, principally for accurate measurement of the brightnesses of stars (still an important area of astronomical research: there are, after all, rather a lot of stars). Lower down is the 1.3-meter (50-inch) telescope, formerly a dedicated infrared telescope, but now closed due to budget restrictions. Evident throughout the picture are the facilities needed to support the large collection of telescopes - water supply, mechanical maintenance, sleeping quarters and cafeteria, office space, and so on.