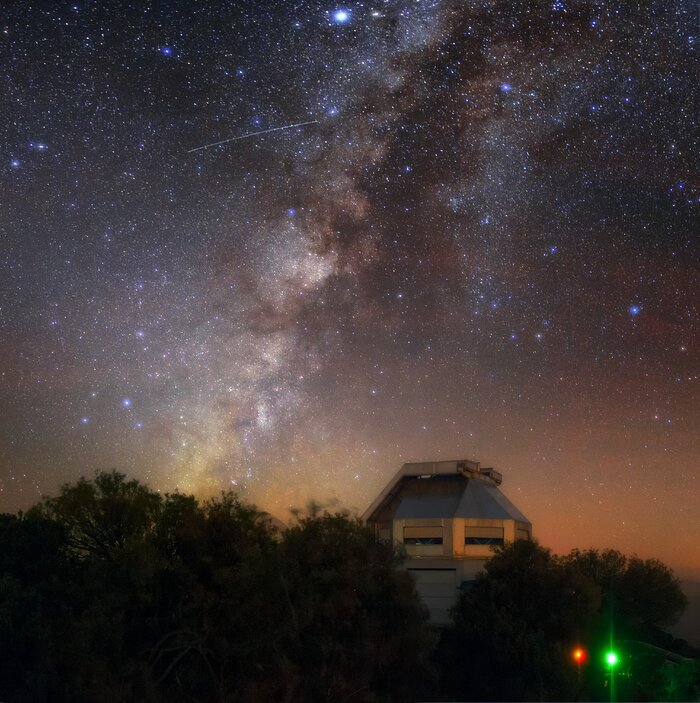 The Milky Way appears to cascade down the skies above Kitt Peak National Observatory (KPNO), a Program of NSF’s NOIRLab, in the Schuk Toak District on the Tohono O'odham Nation in the Arizona-Sonoran Desert. As well as the bright stars and dark dust lanes of the Milky Way, colorful airglow makes this an unusually vivid skyscape. In addition to capturing the natural hues of the night sky, the long exposure time of this photo has revealed an artificial night-sky object — the bright streak across the upper left of the image is, in fact, the trail left by an orbiting satellite.

In the foreground, the WIYN 3.5-meter Telescope can be seen jutting above the vegetation covering Kitt Peak. The telescope hosts the NEID spectrograph, a state-of-the-art instrument that discovers exoplanets by precisely measuring the motions of nearby stars. The instrument was built to detect stellar movements as small as 1 kilometer per hour (0.6 miles per hour) — which is impressive given that the closest exoplanet to Earth is more than 40 trillion kilometers (25 trillion miles) away!