Punching Above Its Weight

The image shows the jet, HH 1165, launched by the brown dwarf Mayrit 1701117 in the outer periphery of the 3 million year old sigma Ori cluster. Traced by emission from singly ionized sulfur, which appears green in the image, the jet extends 0.7 light years (equivalent to 0.2 parsecs) northwest of the brown dwarf. The emission knots along the jet reveal that the mass loss is time variable, probably a result of episodic accretion onto the brown dwarf. The red nebulosity southeast of the brown dwarf is a reflection nebula that traces the outflow cavity in the direction of the counterjet.

The image, taken with the SOAR telescope using the SOAR Adaptive Optics Module, was obtained in several hours of integration time. As described by co-author César Briceño: “We could see the surprisingly extended jet emission after the first 30 minutes of integration. It was a real ‘Wow’ moment!” 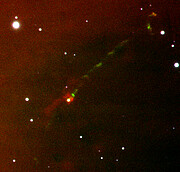