Kitt Peak National Observatory is the future home of a state-of-the-art instrument that will be used to detect and characterize other worlds. The new instrument, an extreme precision radial velocity spectrometer, will measure the subtle motion of stars produced by their orbiting planets. The spectrometer, funded by NASA, will be deployed on an existing telescope at Kitt Peak, the 3.5-meter WIYN telescope. The National Optical Astronomy Observatory (NOAO), which is funded by NSF, is a partner in the telescope and operates Kitt Peak.

The spectrometer is the cornerstone of a newly established partnership between NSF and NASA focused on exoplanet research (NASA-NSF Exoplanet Observational Research; NN-EXPLORE), which aims to advance exoplanet science through the use of the NOAO share of the WIYN telescope. 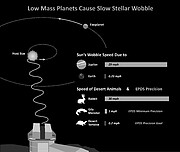