NOAO/WIYN: New Camera at WIYN images an Asteroid with a Long Tail

Using the new wide-field camera at the WIYN 3.5 meter telescope, astronomers have found that the peculiar asteroid P/2010 A2's tail is much longer than previously supposed. The tail is about a million km long, roughly three times the distance from the earth to the moon.

Images taken with the new One Degree Imager (ODI), a wide field optical camera at the WIYN telescope on Kitt Peak (see figure 1) reveal a tail that stretches over a quarter of a degree from the body of asteroid P/2010 A2. The ODI camera can currently image an area of the sky about the size of the full moon: a future upgrade will increase the size of the field to about four times as large.

Asteroids generally have no tails but there have been recent discoveries of a small class that eject dust. Asteroid P/2010 A2 (named for its discovery year ) was first seen by the LINEAR telescope, and follow-up Hubble images, taken by D. Jewitt at UCLA, revealed an unusual structure, an X-shape with a tail. This suggested that A2 was disrupted recently, either by a collision, or by its own rotation.

Jayadev Rajagopal, WIYN scientist at NOAO said, "Previous images of A2 clearly indicated the tail extended beyond those relatively small fields of view: we wanted to use the superb image quality over a wide field that ODI offers to see just how much. But I don't think we were quite expecting to see a tail that extends out to and beyond even the ODI field!"

The disruption of asteroid A2, which the team estimates happened about three and a half years ago, has resulted in centimeter-sized particles being spread out in a tube-like tail. Since the earth orbits in the same plane as this debris, we observe a line, or tail-like structure. In time these particles, under the gravitational pull of the sun, will form a meteor stream surrounding the sun. Meteor streams are what we see as "shooting stars" when the earth ploughs through the stream of debris..

Debris from events like these contribute to the dust cloud, called zodiacal dust, that is spread out over our Solar System. The ODI images will help pin down the amount of dust that asteroids contribute to keeping this cloud replenished.

More information about the discovery and follow-up investigations on A2 is available.

The WIYN Consortium consists of the University of Wisconsin, Indiana University, Yale University, and NOAO. NOAO (National Optical Astronomy Observatory) is operated by Association of Universities for Research in Astronomy Inc. (AURA) under a cooperative agreement with the National Science Foundation. 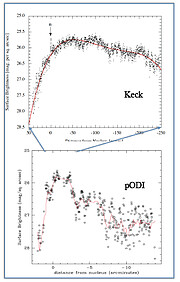