Classic and Digital Versions of GLOBE at Night Thrive in 2007

The GLOBE at Night 2007 citizen-science campaign generated nearly double the number of measurements of the world’s dark (and not so dark) skies compared to its first year. The program also successfully demonstrated a prototype digital data-collection effort that aims to grow to a global scale by 2009 during the International Year of Astronomy.

GLOBE at Night 2007 was done in two modes: the “classic” GLOBE at Night exercise that started in 2006, which anyone can have fun doing with their unaided eyes, and a new effort led by educational outreach staff of the National Optical Astronomy Observatory (NOAO) to obtain precise measurements of urban dark skies using digital sky-brightness meters.

The classic campaign produced 8,491 unique measurements from 60 countries during the March 8-21, 2007 observing period, an increase of 85% over the 4,591 measurements reported by more than 18,000 citizen-scientists in March 2006. The 2007 measurements came from all 50 states except North Dakota. About 65 percent of the 2007 measurements (5,512) were from the United States. Observers from 96 countries reported measurements in 2006—this number was reduced to 60 in 2007 by more strict requirements that nations must be approved participants in the other programs run by the GLOBE organization, which affected at least 29 countries.

These results were released today in Honolulu, Hawaii, at the 210th meeting of the American Astronomical Society.

“We are extremely pleased at the outcome of GLOBE at Night in 2007,” said Stephen Pompea, an astronomer and manager of science education at NOAO. “The classic version is clearly gaining momentum. The digital mode, using sky-brightness meters procured and distributed with special funding support from the National Science Foundation, came together just in time and the early results from this prototype project show great promise.”

The digital data from handheld sky-brightness meters represents “the start of a baseline of measurements that can be used to track changes over time, to compare as ‘ground truth’ with satellite measurements of dark skies, and to search for safe urban ‘dark-sky oases’ that can be preserved,” Pompea added.

Detailed review of the classic data is still underway at GLOBE at Night partner institutions. Initial analysis by NOAO staff of the data from 135 sky-quality meters that were distributed shows that at least 820 measurements were reported, either to the GLOBE Web site or in spreadsheets sent directly to the national observatory. Several dozen measurements may yet be unreported, according to Connie Walker, an astronomer and senior science education specialist at NOAO, and lead coordinator of GLOBE at Night.

Initial maps have been developed of Tucson (184 data points); the Washington, DC and Richmond, VA, region (141 data points); Sonora, Mexico; the island of Hawai’i; and Las Vegas. The Boston area, the state of New Jersey, and Chile also contributed significant data sets, while smaller data sets from individuals in England and South Africa have been received or are anticipated.

“These initial maps are only a first look, but the data shows signs of good consistency and a gradient of bright-to-dark measurements as one moves from the city center to outlying areas, as one would generally expect,” Walker said. “We also saw evidence of people using the meters in creative ways, from students taking dozens of measurements at one site and then averaging them, to ‘mobile units’ created by people driving around and taking data through their car’s moon roof!”

“The level of international interest in GLOBE at Night, and similar programs in other countries, has prompted it to become one of the central themes of the planned International Year of Astronomy in 2009,” said Douglas Isbell, associate director for public affairs and educational outreach at NOAO, and co-chair of the U.S. program committee for IYA 2009. “Both the international-level organization fostered by IAU and the U.S. program committee for IYA 2009 have now formed specific working groups intended to intensify the global effort,” Isbell said.

The GLOBE at Night program is designed to aid teaching about the impact of artificial lighting on local environments, and the ongoing loss of a dark night sky as a natural resource for much of the world’s population. The level and quality of artificial lighting around the world has effects on energy use, public safety, human and animal health, and the ability of the general public and astronomers to share in the beauty of the night sky.

The classic GLOBE at Night program directs students, families, and the general public how to observe and record the number of stars visible in the constellation Orion, as seen from different locations. Observers report their results online by comparing their view of Orion with a set of template images on the program’s Web site, which show the number of stars in the constellation for a range of visibilities from bright skies to very dark.

NOAO received funding from the National Science Foundation in February to purchase the Unihedron meters and related materials to share with educators in Arizona, California, Hawaii, Massachusetts, New Mexico, Nevada, New Jersey, Virginia, 19 small science centers, and the country of Chile, where NOAO has a major observatory. A coordinator at each site instructed local educators in the proper use of the meters and developed a plan to share them during the 13-day, Moon-less observing window

The National Optical Astronomy Observatory (NOAO) consists of Kitt Peak National Observatory near Tucson, AZ; Cerro Tololo Inter-American Observatory near La Serena, Chile; and, the NOAO Gemini Science Center, the route for U.S. astronomers to observe with the Gemini North telescope in Hawaii and the Gemini South telescope in Chile. NOAO is operated by the Association of Universities for Research in Astronomy (AURA), under a cooperative agreement with the National Science Foundation.

For more information on GLOBE, an exemplary education and science program funded by NASA and the National Science Foundation, see the program’s Web page or visit the GLOBE at Night Web site.

For more information on the Unihedron sky-quality meters, see unihedron.com/projects/darksky/. 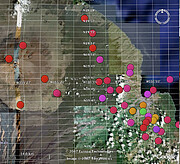 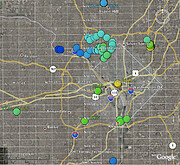 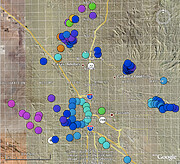 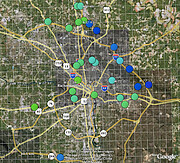 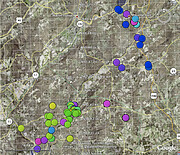