A newly discovered gravitational lens in a relatively nearby galaxy cluster is leading astronomers to conclude that the cluster hosts the most massive galaxy known in our local universe. The study also reaffirms that galactic cannibalism is one reason that this galaxy is so obese, tipping the scales at up to 30 trillion times the mass of our Sun.

The supermassive galaxy is located at the core of the galaxy cluster Abell 3827, which lies some 1.4 billion light-years away. This galaxy and hundreds of its smaller cluster companions are visible in a dramatic new image released by the Gemini Observatory. The image is part of an upcoming paper in The Astrophysical Journal Letters (2010 715 L160) that reports on the study of the massive galaxy using the gravitational lens formed by its core (also visible in the image) to provide new measurements of the galaxy’s extreme mass.

Although this bright galaxy (known as ESO 146-IG 005) dominates the core of Abell 3827, “the magnitude of its appetite has not been fully appreciated,” said Gemini astronomer Rodrigo Carrasco, who is a member of the team that used the 8-meter Gemini South telescope in Chile to study this galaxy and its cluster. The Gemini observations revealed, for the first time, the effects of gravitational lensing near the core of ESO 146-IG 005.

A gravitational lens is created when a massive object (in this case the core of the super-massive galaxy) distorts its local space. Light from a background galaxy (in this case two galaxies) that is passing by appears deflected from its original path. From our perspective, we see the background galaxies’ light reshaped as a ring-like structure and arcs around the lensing object. These arcs from both galaxies are clearly visible in the new Gemini images.

“The gravitational lens we discovered allowed us to estimate for the first time the mass of this monster galaxy very accurately. The inferred mass is a factor of 10 bigger than previous estimates derived from X-ray,” said Carrasco. “Assuming our model is correct, this is by far the most massive galaxy known in our local universe.”

The exceptional galaxy was not simply born massive; it has grown by consuming its companions in perhaps the most extreme example of ongoing “galaxy cannibalism” known. “This unabashed cannibal is something of a messy eater, with the partially digested remains of at least four smaller galaxies still visible near its center,” said team member Michael West, astronomer at the European Southern Observatory who first observed this system more than a decade ago and says that he was immediately struck by the complex morphology of this giant cannibal galaxy (see West’s Astronomy Picture of the Day August 31, 1998). “Eventually this galaxy will grow even bigger judging by the number of nearby galaxies already within its gravitational grasp.”

These observations yield important insight into the process of galaxy growth, especially of elliptical galaxies; these galaxies do not appear to acquire their full mass quickly in the early universe, but instead show significant growth through mergers and cannibalism at later times, after many of their stars have formed. The resulting galaxies, such as this one can be extremely massive.

The Gemini observations were made using the Gemini Multi-Object Spectrograph (GMOS) on the Gemini South telescope in Chile. Follow-up spectroscopic observations used the same instrument to confirm the distances (redshifts) of the two background galaxies whose light is diverted by the massive galaxy. These two galaxies were found to lie at about 2.7 and 5.1 billion light-years away (z= 0.2 and 0.4 respectively). 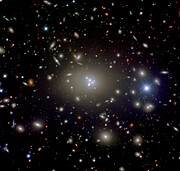 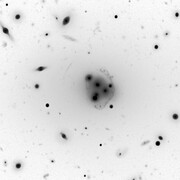