A Chinese Dragon and a Knotted Galactic Embrace

The Gemini Observatory released a pair of images today that capture the dynamics of two very different interactions in space. One is a cold, dark dust cloud that resembles an ethereal-looking Chinese dragon. The other shows a distant duo of galaxies locked in a knot-like embrace that could portend the long-term future of our own Milky Way galaxy.

The processes shown in these views occur on a tremendous range of size scales. NGC 6559 is a relatively small, nearby dust cloud in our Milky Way galaxy that measures about seven light-years across, while NGC 520 features two completely entwined galaxies that stretch across 150,000 light-years. While both images hint at how dynamic and active these objects can be, their evolution occurs on astronomical timescales. According to Ian Robson, Director of the UK's Astronomy Technology Center, “If we could see either of these objects as an extreme time-lapse movie made over millions of years, the galaxy pair would dance in a graceful orbital embrace that is likely similar to the fate between our Milky Way and the great Andromeda Galaxy, while the dusty cloud would probably resemble waving smoke from an extinguished candle.”

Together, these Gemini images illustrate another point about the universe: it’s dusty. The main features of NGC 6559 that lend this nebula its Chinese dragon appearance are dark clouds of backlit dust. The merging galaxies also show a prominent dust lane running diagonally across the image. In both cases this dust is visible because it blocks the light from behind it much like a cloud obscures sunlight here on Earth.

The two images were selected based on observations made during the first half of 2005 at each of the twin Gemini telescopes.

“I coordinated observations in Chile when the dragon-like images of NGC 6559 were obtained,” said Gemini South Astronomer Rodrigo Carrasco. “I could tell this was going to make a fantastic color image with lots of details never resolved before in this cloud of dust. Other astronomers will appreciate this data now that it is in the Gemini Data Archive."

Gemini North on Mauna Kea captured the image of NGC 520, showing two interacting galaxies against a backdrop of dimmer much more distant galaxies. Gemini Astronomer Kathy Roth oversaw the observations and shared her reactions. “Watching images like these come off the telescope is always a thrill. It is very satisfying to have everything working perfectly and to be able to take advantage of the great conditions on Mauna Kea," she said. “This particular image not only makes a pretty picture but I expect will it be useful to astronomers who model interacting galaxies and how these interactions trigger star formation.”

The pair of images were obtained using the Gemini Multi-Object Spectrograph (GMOS). It provides high-resolution imaging on both of the twin Gemini 8-meter telescopes. The observations are part of the ongoing Gemini Legacy Imaging program that shares striking views of the universe made possible with the new generation of large ground-based telescopes. Travis Rector of the University of Alaska combined the raw data to create the color images. Additional technical and background information and full-resolution image downloads are provided on page 2 of this release.

NGC 6559 is part of a larger star-forming region in the southern constellation Sagittarius. The dark structure that resembles a Chinese dragon is caused by cool dust that absorbs background radiation from hydrogen gas that glows in red light due to ionization from nearby stars. This region lies less than one degree away from the popular Lagoon Nebula (M8), and is located some 5,000 light-years away toward the center of our Milky Way galaxy. At this distance the length of the cloud (diagonally across the image) is about 7 light-years.

The intricate details and wispy structure in the dark cloud is determined by turbulence flow dynamics influenced by variables such as nearby star radiation and motions of other nearby gas and dust. These kinds of clouds illustrate how past generations of stars are dispersing heavier elements into our galaxy, material that will seed future generations of stars and possibly planetary systems.

This image of NGC 6559 was obtained on the night of July 10, 2005 (UT) at the Gemini South Telescope in Chile. The image was a combination of four images obtained with the following filters and total exposure times per filter:

NGC 520 has a unique shape that is the result of two galaxies colliding with each other. One galaxy’s dust lane can be seen easily in the foreground and a distinct tail is visible at bottom center. These features are a result of the gravitational interactions that have robbed both of the galaxies of their original shapes. Some astronomers speculate that each member of the pair was originally similar to the Milky Way and Andromeda Galaxy. This collision could be providing us a glimpse at what might happen to our own galaxy in about five billion years as the Andromeda Galaxy collides with our Milky Way.

Estimated to lie some 100 million light-years away in the direction of the constellation Pisces, these galaxies have likely changed significantly in the time it has taken for their light to reach us. This view may be fairly early in the galactic dance that these galaxies have been performing. Hints of star formation (faint red glowing areas above and beneath the middle of the image) may have become more pronounced during the course of the collision.

Many background galaxies also appear in this image. They represent galaxy evolution at an even earlier epoch in the history of the universe.

This image of NGC 520 was obtained on the night of July 13-14, 2005 at the Gemini North Telescope on Mauna Kea in Hawaii. The image was a combination of four images obtained with the following filters and total exposure times per filter: 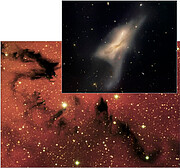