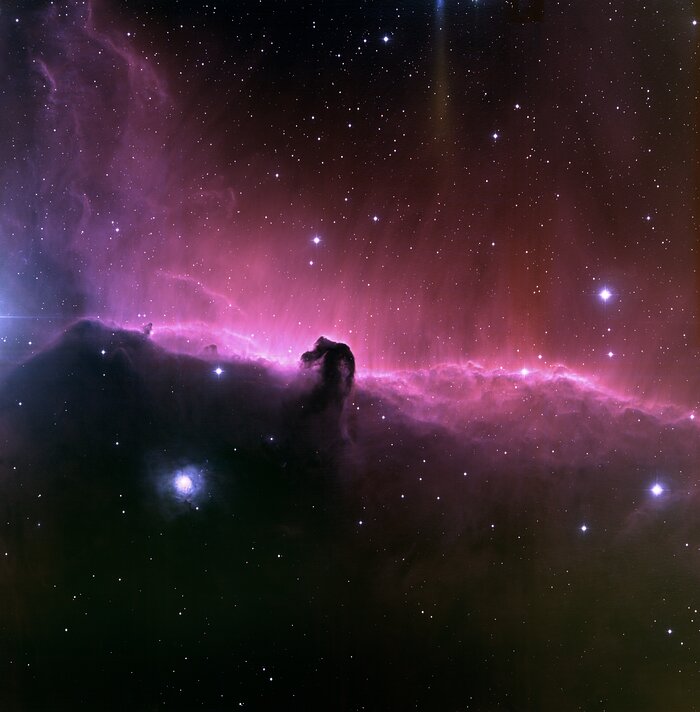 This exceptional image of the Horsehead nebula was taken at the National Science Foundation's 0.9-meter telescope on Kitt Peak with the NOAO Mosaic CCD camera. Located in the constellation of Orion, the Hunter, the Horsehead is part of a dense cloud of gas in front of an active star-forming nebula known as IC434. The nebulosity of the Horsehead is believed to be excited by the bright star Sigma Orionis, which is located above the top of the image. Just off the left side of the image is the bright star Zeta Orionis, which is the easternmost of the three stars that form Orion's belt. Zeta Orionis is a foreground star, and is not related to the nebula. The streaks in the nebulosity that extend above the Horsehead are likely due to magnetic fields within the nebula. Close study reveals that many more stars are visible in the top half of the image. Stars in the lower half of the image are obscured by a dark cloud of hydrogen gas. The edge of this large cloud is the horizontal strip of glowing gas that bisects the image. The Horsehead is located about 1,600 light-years away from Earth. The area shown in this image is quite large on the sky, covering about five times the area of the full Moon. This false-color image was created by combining emission-line images taken in hydrogen-alpha (red), oxygen [OIII] (green) and sulfur [SII] (blue).