The following is based on a translation of the Korean press release.

A team of Korean astronomers discovered a faint quasar in the early Universe which sheds light on the main sources of illumination about 1 billion years after the Big Bang. The team used the Gemini South telescope in Chile, and several telescopes on Maunakea in Hawai‘i, to make the discovery. This is the first published scientific result from the Korean astronomical community since the Korea Astronomy and Space Science Institute (KASI) joined in a limited partnership with Gemini at the beginning of 2015.

The history of objects we see today in the Universe started when the first stars formed a few hundred million years after the Big Bang. However, it has been unclear what types of objects illuminated the intergalactic medium in order to ionize neutral atoms (called the re-ionization of the universe).

Quasars, because they are so bright, have been suggested as one of the main “culprits” for the source of re-ionizing energy. Quasars shine when supermassive black holes at the centers of galaxies vigorously accrete gas and stars – they can blaze at up to 100 times the total brightness of their host galaxies. Knowing the number of quasars in the early Universe with moderate luminosity (from about a few to 10 times more luminous than our Milky Way galaxy) can provide an important clue to solving this puzzle, since moderate luminosity quasars dominate the available illumination provided by quasars.

However, moderate luminosity quasars are faint (because they are so distant), and rare, so it is challenging to find them. So far, only two or three such objects have been identified. In order to find moderate luminosity quasars at a redshift of 6 (or about one billion years after the Big Bang), the team performed a moderately wide and deep imaging survey, called the Infrared Medium-deep Survey (IMS) using the data taken with telescopes on Maunakea, including the United Kingdom Infrared Telescope, and the Canada-France-Hawai‘i Telescope. In a subset of these data, the team identified 7 faint quasar candidates. Subsequently, the spectrum of one of these quasars, obtained with the Gemini Multi-Object Spectrograph (GMOS) at the Gemini South telescope in July 2015, revealed that the object is indeed a much sought-after moderate luminosity quasar in the early Universe.

The newly discovered quasar, named as IMS J220417.92+011144.8, is expected to harbor a black hole of about 10 million to 100 million solar masses. Its distance is about 12.8 billion light-years from us. The discovery of IMS J2204+0111 and the statistical results of the survey suggest that quasars can only contribute up to about 10% of the re-ionizing flux in the early Universe. This value is lower than expected and doesn’t provide enough energy to fully account for the re-ionization of the Universe. Additionally, the redshifts of the other quasar candidates are still unknown; if they turn out not to be quasars, this number would be reduced even further. Therefore, it is unlikely that quasars are the dominant sources of illumination in the early Universe: 90% or more of the light must originate from other objects.

The discovery was made possible thanks to the GMOS’s high sensitivity to infrared light where most of the light of such high-redshift quasars is concentrated. This work was carried out by Yongjung Kim (lead author), Myungshin Im (Principal Investigator), and Yiseul Jeon of Seoul National University, Minjin Kim at Korea Astronomy and Space Science Institute, and 14 other collaborators. The result was published in the November 10 issue of The Astrophysical Journal Letters, and the paper is available on the astro-ph. 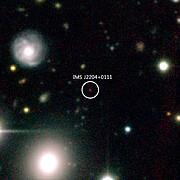