On Saturday evening, July 19th, Gemini Observatory, in a partnership with the ‘Imiloa Astronomy Center shared with Hawai'i residents "The Adventures of gAstronomy!" Dr. Steve Howell, Project Scientist for NASA's Kepler Planet Finding Mission, and Chef Bill Yosses, former White House Executive Pastry Chef, wowed the audience with their speculation about the conditions on selected exoplanets -- which inspire recipes for chefs like Yosses.

Numerous samples of exoplanet-inspired culinary delights, from mango spheres, to exotic foams, and polymers, titillated audience's taste buds throughout the evening. “The excitement of discovering thousands of exoplanets can be brought right into your kitchen,” said Howell, who added that, “The same science principles astronomers use to understand alien worlds are used to create marvels of culinary delight.” Together, Howell and Yosses have combined modern molecular gastronomy methods, and basic physics, to teach a little of both, and provide exotic taste treats.

“We believe the enthusiasm we have for cooking and science is contagious and this event at the ‘Imiloa Planetarium proves that new discoveries in one field can generate waves of new ideas in others. We want to thank the Gemini and ‘Imiloa teams, the volunteers, and the Hilo community for their support,” Chef Yosses noted.

We hope these photos capture some of the event’s “flavor!”

Dr. Howell and his research/observing team are in Hilo/Hawai'i Island to observe with the Gemini North telescope on Mauna Kea. Using their visiting instrument -- DSSI (Differential Speckle Survey Instrument) – they will confirm and explore dozens of Kepler discovered exoplanet candidates.

UPDATE: Here are two "recipies" you can use to re-create either Oxygen Foam or Slime as seen during the event.

The basic science here is that you have hydrogen peroxide, which could be called hydrogen dioxide, since it is just a water molecule with an extra oxygen atom attached. Hydrogen peroxide is H2O2, water is of course H2O. By adding another chemical, called a catalyst, to the peroxide, you start a chemical reaction that releases the extra oxygen attached to the water molecule. If you mix in a little dish soap you can capture the released oxygen gas in the form of bubbles.
You will need…

Now you need to prepare your yeast. The yeast acts as a catalyst to release an oxygen atom from the hydrogen peroxide. These free O atoms will combine to form O2 resulting in the reaction H2O2 à H2O + O2. Add the teaspoon of yeast to a few tablespoons of warm water, stir and let sit for 30 seconds. This yeast solution will give you a rich creamy foam of tiny bubbles.

Add the yeast solution to the hydrogen peroxide solution. You will get quite a surge of tiny soapy bubbles. The long lasting foam will be warm because this reaction is exothermic, that is it produces heat.

**Making “glow in the dark” slime dye. Take a yellow high-lite marker and break it open. Inside is a yellow colored cartridge soaked with Fluorscen, a compound that absorbs very blue and ultraviolet light and re-emits it as yellow-green light. Place the cartridge in a glass of water and let it sit for a few hours. The water will turn yellow as the water-soluble dye is absorbed into the water. Use the water as you would food coloring to color the slime.

Here you can find the full videos to give you just a taste of what happened: 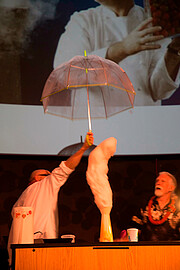 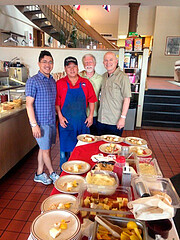