Near Infrared Spectra Constrain an Extraordinary Pair of Cosmic Dwarves

A British team led by Matt Burleigh (University of Leicester) and P. F. L. Maxted (Keele University) have discovered and characterized an extremely rare stellar system composed of a white dwarf and brown dwarf pair. Named WD 0137-349, this pairing is the only known close, detached binary system with a white dwarf and a confirmed substellar companion. The system is exceptionally intriguing given the measured orbital period of P = 116 minutes. Such a short period implies that the stars orbit within one solar radius from one another. This is close enough that the brown dwarf must have survived the period of common envelope evolution where it was completely engulfed by the atmosphere of the red giant progenitor of the white dwarf.

Earlier work by Maxted et al. had already established a mass of 0.39 +/- 0.035 Msun for the white dwarf and of 0.053 +/- 0.006 Msun for the companion. The derived mass of the companion is well below the 0.075 Msun threshold that separates stars from brown dwarfs. The original discovery of the system was part of the VLT 'SN Ia Progenitor Survey' led by R. Napiwotzki.

The Maxted et al. paper noted that the only way to accurately determine the spectral type of the brown dwarf was through near-infrared spectroscopy. To this end the team obtained a near infrared spectrum using the GNIRS instrument on the Gemini South Telescope. Figure 2 shows that the spectrum is dominated by the hot 16,500 K white dwarf in the optical, however, excess emission is seen at all wavelengths longer than ~1.95 microns. The team fit this excess emission using a variety of known brown dwarf spectra as templates to determine the spectral type of the companion. The best fit is provided by a spectral type L8 brown dwarf, making the WD 0137-349 object the lowest mass and lowest temperature brown dwarf companion to a white dwarf as yet discovered. For a cooling age of about one billion years, the temperature of the brown dwarf companion is between 1300 K and 1400 K.

The orbital separation between the primary white dwarf and secondary brown dwarf is amazingly small, equivalent to 0.65 the radius of the Sun, hence a bit more than the Earth-Moon separation. Given the relative sizes of such objects, Gemini's Dr. Jay Farihi notes that, "When you look in the near-infrared at a white dwarf, a brown dwarf (L-type) companion is like an elephant trying to hide behind a golf ball!" The situation would have been just as extreme but in the opposite sense when the the star that became the white dwarf went through its 'red giant' phase. At that point the atmosphere of the (then giant) primary would have been large enough to engulf the brown dwarf in its orbit. Astronomers believe that the drag of the thin envelope of the giant was sufficient to cause the brown dwarf to slowly spiral in towards the red giant's core as it orbited the primary. The brown dwarf survived this stage and stayed in its tightly bound orbit once the red giant's atmosphere had been completely dispersed, leaving the white dwarf we see today.

The paper is based on observations obtained under Director's Discretionary time in 2005B. For more details, see the article "A near-infrared spectroscopic detection of the brown dwarf in the post common envelope binary WD 0137-349", Monthly Notices of the Royal Astronomical Society, 373, L55-L59, 2006. 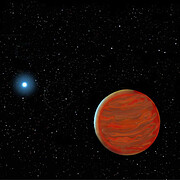