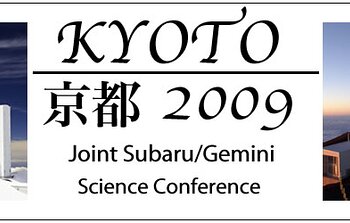 geminiann08026 — Anuncio
KYOTO 2009
23 Diciembre 2008: The Subaru and Gemini Observatories are pleased to announce a jointly sponsored science meeting that will be held at Kyoto University, Kyoto Japan, between May 18-21, 2009. An estimated two-hundred and fifty participants, approximately half coming from each community, will meet to present research conducted at the two observatories and to explore possible collaborations. The two main goals of the conference are to promote a mutual understanding of both communities and to highlight the international nature of modern astronomy. Other goals are to: Better understand the Subaru and Gemini instruments and science programs Foster scientific collaborations Define key areas of 'niche science' for both observatories Initiate scientific collaboration for, and with respect to, the International Year of Astronomy in 2009 The Scientific and Local Organizing Committees have recently been appointed. The SOC is led by two co-chairs Masashi Chiba (Tohoku University) and Timothy C. Beers (Michigan State University). The LOC ...
Leer más 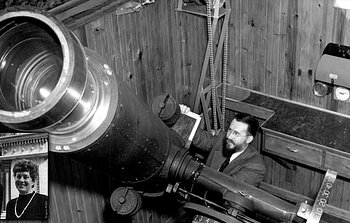 noaoann08027 — Anuncio
Frank Kelley Edmondson
23 Diciembre 2008: Professor Edmondson was one of the major players in the creation of the Association of Universities for Research in Astronomy (AURA) and the National Observatory.
Leer más 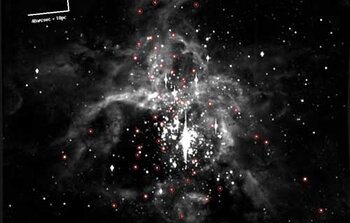 geminiann08025 — Anuncio
Binary Stars Abound in 30 Doradus Cluster
15 Diciembre 2008: A recent optical spectroscopic study led by Guillermo Bosch (Universidad de La Plata), Elena and Roberto Terlevich (INAOE, Tonantzintla) used the spectro-imager GMOS-South to reveal that a surprisingly high fraction (>50%) of the stars in the cluster NGC 2070 are binary. This massive cluster is responsible for ionizing the gas in the spectacular 30 Doradus nebula located in the Large Magellanic Cloud. The fraction of binaries is an important factor influencing the initial mass function (IMF), the cluster’s age, and dynamical mass determination. Although a large amount of work has been done on 30 Doradus and its ionizing cluster, little is known of it binary fraction. Bosch and his colleagues obtained optical spectroscopy with the Gemini Multi-Object Spectrograph (GMOS) on Gemini South of 52 early-type stars on six epochs. Radial velocities derived for each night were very stable, with variation less than 1.0 km/sec. Twenty-five out of the 52 stars ...
Leer más 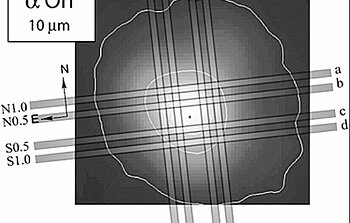 geminiann08024 — Anuncio
Shedding Light on Betelgeuse and VY Canis Majoris as Future Supernovae
10 Diciembre 2008: Nathan Smith (University of California – Berkeley), Ken Hinkle (NOAO) and Nils Ride (Lund Observatory) have used the near infrared spectrograph PHOENIX on Gemini South to study the geometry and kinematics of the active circumstellar envelopes in the supergiant stars Betelgeuse and VY Canis Majoris. These two stars are shedding huge amounts of mass in their “last gasps” and could explode as supernovae any time now. Stars with initial mass of 20-40 solar mass are important, because their complex post-main sequence evolution is determined by their poorly understood mass loss. Massive stars shed copious amount of mass before exploding as supernovae; as instability of the interior and outer layers increases, such episodes of mass loss may be extremely intense in the late phases. Sampling the observable circumstellar envelopes around nearby massive stars can help to predict what type of supernovae we might expect in the event that they explode. Many ...
Leer más 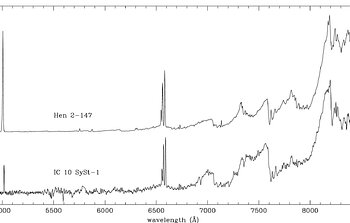 geminiann08023 — Anuncio
Most Distant Symbiotic Star Pair Discovered
3 Diciembre 2008: An international team led by Brazilian astronomer Denise Gonçalves used the Gemini Multi-Object Spectrograph (GMOS) on Gemini North to discover the most distant known symbiotic star. The star is part of a dwarf starburst galaxy in the Local Group called IC10 and is located about 750 kiloparsecs (about 2.5 million light-years) away. A symbiotic star is a variable binary star in which one star has expanded its outer envelope, in the late stages of its evolution, and is shedding mass quickly on another hot star (often a white dwarf). Some time in the future, the pair will end catastrophically with the white dwarf detonating as a Type Ia supernova as more material is dumped on it by the red giant. Symbiotic stars are critical in understanding Type Ia supernovae and the evolution of binary star systems. However, relatively few systems of this sort are known so finding them outside of ...
Leer más 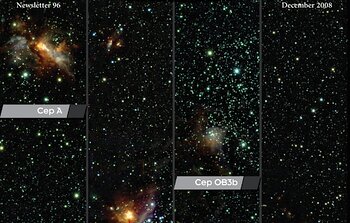 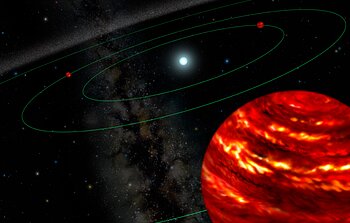 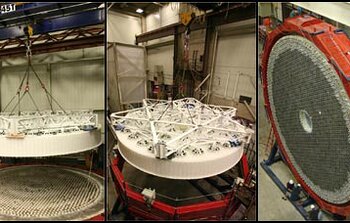 noaoann08024 — Anuncio
LSST Mirror Lifted
30 Octubre 2008: The 8.4-meter mirror blank for the Large Synoptic Survey Telescope (LSST) has been successfully lifted from the furnace hearth at the Steward Observatory Mirror Lab, installed into a turning ring, and tilted to a vertical position. It is now ready for core cleanout, which will reduce its mass from 46,500 kg to 16,600 kg. The mirror is scheduled to be completed in January 2012, and will be the largest two-surface optical mirror ever made from a single substrate.
Leer más 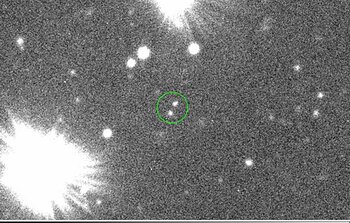 geminiann08022 — Anuncio
A Highly-split Kuiper Belt Pair
28 Octubre 2008: A group of astronomers using a battery of 8-meter telescopes, including both Gemini North and South, have discovered a small pair of gravitationally bound Kuiper Belt objects with an enormous separation (Figure 1). The extreme binary, 2001 QW322, orbits at 43 astronomical units or about 6.5billion kilometers from the Sun. The two bodies are separated by about 125,000 kilometers (one third the distance from the Earth to the Moon) which is very large for these two tiny bodies. As a comparison, this is approximately equivalent to a pair of baseballs gravitationally "connected" and orbiting each other at a distance of 200 kilometers! 2001 QW322 was discovered in August 2001 with the Canada-France-Hawai‘i Telescope. Since then, (from 2002-2007), the pair has been monitored closely using 8-meter-class telescopes (Gemini North,Gemini South and the European Southern Observatory’s Very Large Telescope) to obtain high precision photometric observations of the faint double system (mg = ...
Leer más 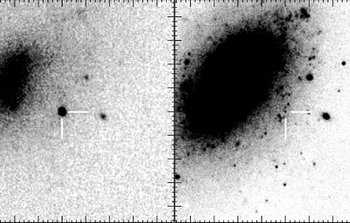 geminiann08021 — Anuncio
Infrared echoes from new and old dust - the case of SN 2006jc
7 Octubre 2008: Supernova 2006jc occurred when its massive progenitor star ended its life in spectacular fashion. The star exploded following a Luminous Blue Variable (LBV)-like outburst two years before (Pastorello et al.2007, Nature, 447, 829). An international team led by Seppo Mattila (Queen’s University, Belfast and University of Turku) observed the supernova and followed its evolution between days 86-493 after the explosion with an array of telescopes including the Gemini North telescope (using the Near Infrared Imager NIRI), the United Kingdom Infrared Telescope (UKIRT) and the Spitzer Space Telescope. This exceptional event has contributed significantly to our understanding of how core-collapse supernovae (SNe) and their progenitors can add to the dust content of the universe. Mattila et al. imaged SN 2006jc in the near infrared between days 86 and 493 with the UKIRT and Gemini North telescopes (Figure 1). Mid-IR observations were obtained with the Spitzer Space Telescope before the explosion and ...
Leer más 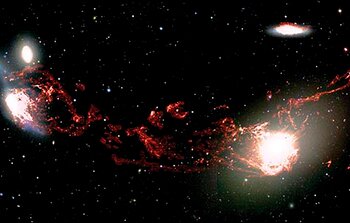 noaoann08022 — Anuncio
Probing a New Type of Stellar Explosion
15 Septiembre 2008: A U.S. astronomer using the Gemini South and Blanco telescopes in Chile has added a startling new clue to the ongoing mystery over the "engine" of the historical 1843 outburst of Eta Carinae, a bright star in the southern skies. The new observations by Nathan Smith of the University of California, Berkeley, reveal faint but extremely fast material indicative of a powerful shock wave produced by the 1843 event, suggesting that its driving mechanism was an explosion rather than a steady wind. The result is featured in the September 11, 2008 issue of the journal Nature.
Leer más 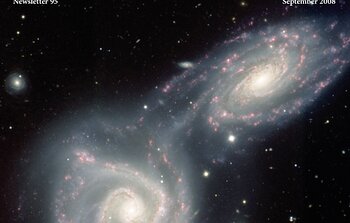 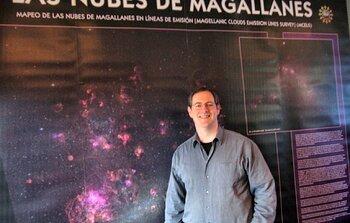 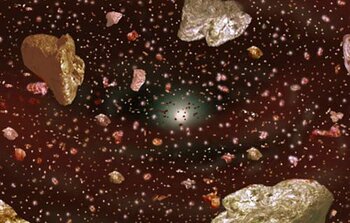 geminiann08020 — Anuncio
Young Asteroid Families Newly Classified by GMOS
14 Agosto 2008: Optical spectroscopy from the Gemini telescopes has revealed a relatively uncommon type of asteroid in the main-belt for the first time. The discovery was made by a joint Brazil and US project led by Thais Mothé-Diniz of the Observatório Nacional in Rio de Janeiro and David Nesvorný of the Southwest Research Institute (Boulder, Colorado). The team used both GMOS North and South to obtain optical spectra of asteroids with estimated ages of < 1 Myr which they then compared to laboratory spectra of meteorites that have fallen to Earth. They found that spectra of asteroids in the newly discovered Datura family have a deep absorption feature near 0.8 microns which classifies them as ‘Q-type’ asteroids. This spectral feature is produced by silicate material, in particular olivine and pyroxene. Most interestingly, the spectra of Q-type objects are well-matched to the most common type of meteorite found on Earth called an ordinary ...
Leer más 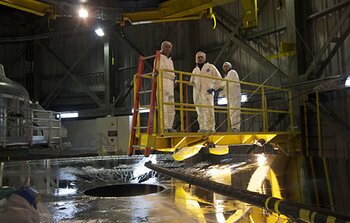 geminiann08019 — Anuncio
Gemini North Mirror Receives New Silver Coating During Major Shutdown
14 Agosto 2008: During the second half of July 2008, the Gemini North telescope facility on Mauna Kea underwent a major 20-day scheduled shutdown. The shutdown allowed engineers and technicians to address a number of deferred upgrades and maintenance projects, (see a list of projects here), that are only possible during an extended period of electromechanical work. Included was the successful re-coating of the 8-meter primary mirror with protected silver. "As a scheduled shutdown, we are able to take care of maintenance and upgrades that are not possible when we are on the sky each night," said Brian Walls of Gemini's Systems Engineering team. "And while the new silver coating gets most of the attention, the concurrent work done on the telescope is critical since the entire telescope system needs to function at the same high level..." About four years ago the Gemini North telescope's primary mirror received its first protected silver coating ...
Leer más 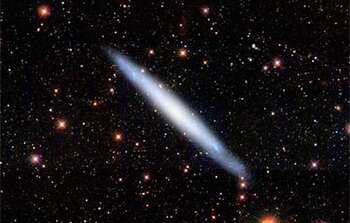 geminiann08018 — Anuncio
A Rotating Compact Nuclear Stellar Cluster in NGC 4244
31 Julio 2008: Based on laser guide star adaptive optics (LGS-AO) -fed integral field spectroscopy with the Near-Infrared Spectrograph (NIFS) at Gemini North, Anil C. Seth of the Harvard-Smithsonian Center for Astrophysics and his collaborators demonstrate that the massive nuclear stellar cluster at the core of the spiral galaxy NGC 4244 is strongly rotating. Most late-type spiral galaxies and early-type galaxies have prominent nuclear star clusters (NSCs), i.e. a significant conglomerate of stars about the same size (~ 5 parsecs) as normal globular clusters. Furthermore, the masses of NSCs are coupled to the mass of their host galaxy, following the similar mass vs. velocity dispersion relation known for massive black holes. This suggests that the formation of NSCs and black holes are linked to the formation of their host galaxy. However, unlike that of black holes, the assembly history of NSCs can be inferred from studies of their kinematics and stellar content. NGC ...
Leer más 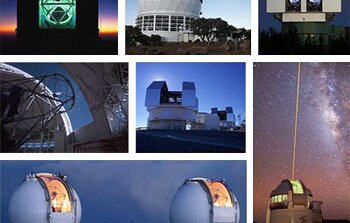 noaoann08019 — Anuncio
ALTAIR Seeks Community Input
29 Julio 2008: The ALTAIR (Access to Large Telescopes for Astronomical Instruction and Research) committee, recently convened by NOAO, seeks to understand the needs of the US community related to ground-based O/IR telescopes in the 6.5- to 10-m aperture range. We ask you to respond to the ALTAIR committee survey regarding your current and future anticipated use of such facilities, including Gemini.
Leer más 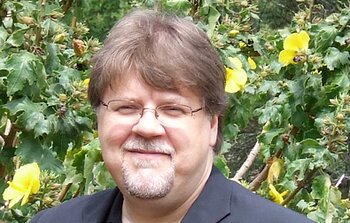 noaoann08018 — Anuncio
New Director of the WIYN Observatory
22 Julio 2008: Astronomer Pierre Martin, director of science operations at the Canada-France-Hawaii Telescope (CFHT), has been selected as the new director of the WIYN Observatory, which operates 3.5-meter and 0.9-meter telescopes on Kitt Peak. Starting September 22, Martin succeeds George Jacoby, who will return to the scientific staff of the National Optical Astronomy Observatory (NOAO).
Leer más 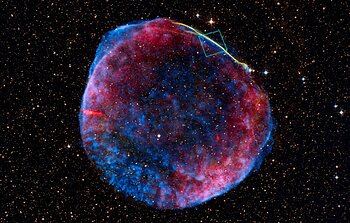 noaoann08017 — Anuncio
A Multiwavelength View of Celestial Fireworks
14 Julio 2008: Around May 1, 1006 A.D., observers from Africa to Europe to the Far East witnessed and recorded the arrival of light from what is now called SN 1006, a tremendous supernova explosion caused by the final death throes of a white dwarf star. This image of SN1006 is a composite of optical, radio, and X-ray data of the full shell of the supernova remnant. The optical data was obtained at the University of Michigan’s 0.9-meter Curtis Schmidt telescope at Cerro Tololo Inter-American Observatory in Chile. H-alpha, continuum-subtracted data were provided by FrankWinkler (Middlebury College) et al. The object has an angular size of roughly 30 arcminutes (about the size of the full Moon), and a physical size of 60 light-years, based on its distance of nearly 7,000 light-years.
Leer más
Mostrando 1 hasta 20 de 53
Uso de Imágenes y Videos de NOIRLab
¿Es Periodista? Suscríbase al Boletín para Medios de NOIRLab