A team led by astronomers from CTIO has found faint visible echoes of three ancient supernovae by detecting their centuries-old light as it is reflected by clouds of interstellar dust hundreds of light-years removed from the original explosions. The oldest one is likely to have occurred more than six hundred years ago. 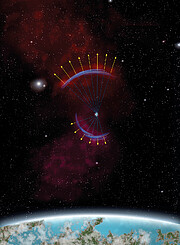 PR Image noaoann05029a
Flashes from the Past: Echoes from Ancient Supernovae