Resolving an Exoplanet’s Motion to Constrain a Young Planetary System

Using the Gemini Planet Imager astronomers have successfully monitored the motion of a planet around the forming exoplanet system orbiting the star HD 95086 and suggest that more unseen planets are present. The large international team, led by Julien Rameau, a postdoctoral researcher at the Université de Montréal (Canada), used the Gemini Planet Imager (GPI) at the Gemini South telescope in Chile to observe the system over a period from 2013 until early this year. “During this short time we directly imaged the exoplanet, known as HD 95086 b, a 4-5 Jupiter mass planet, and its motion,” says Rameau. With these data, Rameau and his team determined that this planet is orbiting nearly face-on from our perspective, at about 60 astronomical units or twice the distance between our Sun and Neptune, and it has a low eccentricity, or nearly circular, orbit. Rameau adds, “This extremely high-resolution imaging with GPI was critical to setting constraints on the overall system.” They suggested that this planet could not be responsible for the 50au-wide gap in the system’s debris disk inferred from previous observations in the infrared. ”Because of the orbital configuration of planet b, we conclude that another body, or bodies, are necessary to explain the architecture of the system”

We present astrometric monitoring of the young exoplanet HD 95086 b obtained with the Gemini Planet Imager between 2013 and 2016. A small but significant position angle change is detected at constant separation; the orbital motion is confirmed with literature measurements. Efficient Monte Carlo techniques place preliminary constraints on the orbital parameters of HD 95086 b. With 68 % confidence, a semimajor axis of 61.7 +20.7/-8.4 au and an inclination of 153.0 +9.7/-13.5 are favored, with eccentricity less than 0.21. Under the assumption of a co-planar planet-disk system, the periastron of HD 95086 b is beyond 51 au with 68 % confidence. Therefore HD 95086 b cannot carve the entire gap inferred from the measured infrared excess in the SED [spectral energy distribution] of HD 95086. We use our sensitivity to additional planets to discuss specific scenarios presented in the literature to explain the geometry of the debris belts. We suggest that either two planets on moderately eccentric orbits or three to four planets with inhomogeneous masses and orbital properties are possible. The sensitivity to additional planetary companions within the observations presented in this study can be used to help further constrain future dynamical simulations of the planet-disk system. 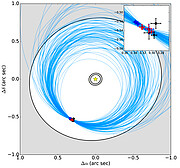