Research shows that supermassive black holes like to be the only residents on the block, as stars too close to them end up being thrown vast distances from the galaxy's center. As black holes eject stars around them, the neighborhood becomes darker. Astronomers have been hunting for these gloomy neighborhoods in galaxy cores for decades. The signature of supermassive black holes are known as light deficits, due to the lack of stars surrounding them.

Gemini Science Fellow, Juan Madrid and Carlos Donzelli from the Cordoba observatory in Argentina were granted observations through the Director's Discretionary Time, and used new Gemini data to study the brightest galaxy of the galaxy cluster Abell 85 to verify earlier observations hinting that one of the most supermassive black holes ever discovered resided at the galaxy's core.

The Gemini Multi Object Spectrograph (GMOS) at Gemini South needed only seven minutes of observations to reveal that the brightest galaxy of Abell 85 does not have a light deficit. On the contrary, the high resolution of the Gemini data show that the core of this galaxy has a light excess incompatible with the theory that it hosts an especially massive black hole.

New high-resolution r band imaging of the brightest cluster galaxy (BCG) in Abell 85 (Holm 15A) was obtained using the Gemini Multi Object Spectrograph. These data were taken with the aim of deriving an accurate surface brightness profile of the BCG of Abell 85, in particular its central region. The new Gemini data show clear evidence of a previously unreported nuclear emission that is evident as a distinct light excess in the central kiloparsec of the surface brightness profile. We find that the light profile is never flat nor does it present a downward trend towards the center of the galaxy. That is, the new Gemini data show a different physical reality from the featureless, "evacuated core" recently claimed for the Abell 85 BCG. After trying different models, we find that the surface brightness profile of the BCG of Abell 85 is best fit by a double Sérsic model. 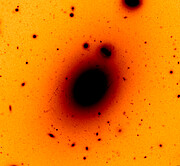 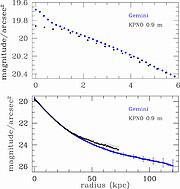