Are the Coolest Brown Dwarfs Loners?

A research team, led by Daniela Opitz (University of New South Wales), utilized the high spatial resolution and infrared sensitivity of the Gemini Multi-Conjugate Adaptive Optics System (GeMS) to help fill this gap in our understanding. Their work, recently accepted for publicaiton in The Astrophysical Journal and available on astro-ph, uses GeMS on five Y dwarfs discovered by the NASA Wide-field Infrared Survey Explorer (WISE) to look for evidence of companions. The team found no evidence for equal-mass binaries with separations greater than 0.5-1.9 Astronomical Units, which is consistent with what is observed in the warmer and brighter brown dwarfs.

While more studies are needed to fully understand the binary fractions of Y-type brown dwarfs, this work establishes a solid foundation for future work at Gemini and other infrared optimized telescopes.

The NASA Wide-field Infrared Survey Explorer (WISE) has discovered almost all the known members of the new class of Y-type brown dwarfs. Most of these Y dwarfs have been identified as isolated objects in the field. It is known that binaries with L- and T-type brown dwarf primaries are less prevalent than either M-dwarf or solar-type primaries, they tend to have smaller separations and are more frequently detected in near-equal mass configurations. The binary statistics for Y-type brown dwarfs, however, are sparse, and so it is unclear if the same trends that hold for L- and T-type brown dwarfs also hold for Y-type ones. In addition, the detection of binary companions to very cool Y dwarfs may well be the best means available for discovering even colder objects. We present results for binary properties of a sample of five WISE  Y dwarfs with the Gemini Multi-Conjugate Adaptive Optics System (GeMS). We find no evidence for binary companions in these data, which suggests these systems are not equal-luminosity (or equal-mass) binaries with separations larger than 0.5-1.9 AU. For equal-mass binaries at an age of 5 Gyr, we find that the binary binding energies ruled out by our observations (i.e. 10^11  erg) are consistent with those observed in previous studies of hotter ultra-cool dwarfs. 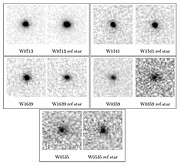