A team of Norwegian and US astronomers, using data from Gemini North and the Nordic Optical Telescope (NOT), have measured the time delay in images of a quasar lensed by a foreground cluster of galaxies. The Gemini observations are the first published result obtained with the innovative Fast Turnaround (FT) mode of observing.

A distant quasar may have its light split into multiple images by a foreground galaxy cluster that acts as a gravitational lens. The light travels along different paths of differing lengths to form each of these images. Quasars themselves are intrinsically variable, so the observed fading and brightening of each image happens at different observed times. Measuring these “time delays” yields tight constraints on the mass distribution in the lensing cluster, as well as the lensing geometry, and hence cosmology.

The team monitored the redshift z=2.82 quasar SDSS J2222+2745 over the course of three years, using the NOT and Gemini+GMOS-N. They found a time delay of 48 and 722 days for two pairs of the quasar’s lensed images. The Gemini data were instrumental in refining the time delay measurements for the quasar image that leads the other image by ~ 2 years and hence predicts the behavior of other images of the quasar; continuing monitoring of the system will now allow further observations that take advantage of that 2 year peek into the future.

Under Gemini’s FT mode, users can submit proposals every month and (if accepted) receive data 1-4 months after their initial proposal idea. The mode can be used for any kind of scientifically valuable project that needs just a few hours of observing time. Since the program’s launch in January, it has been used to follow up discoveries of new solar system objects, obtain data sets needed to complete projects, and also for short, self-contained programs. For more information, see the FT web pages

We report first results from an ongoing monitoring campaign to measure time delays between the six images of the quasar SDSS J2222+2745, gravitationally lensed by a galaxy cluster. The time delay between A and B, the two most highly magnified images, is measured to be τAB=47.7±6.0 days (95% confidence interval), consistent with previous model predictions for this lens system. The strong intrinsic variability of the quasar also allows us to derive a time delay value of τCA=722±24 days between image C and A, in spite of modest overlap between their light curves in the current data set. Image C, which is predicted to lead all the other lensed quasar images, has undergone a sharp, monotonic flux increase of 60-75% during 2014. A corresponding brightening is firmly predicted to occur in images A and B during 2016. The amplitude of this rise indicates that time delays involving all six known images in this system, including those of the demagnified central images D-F, will be obtainable from further ground-based monitoring of this system during the next few years. 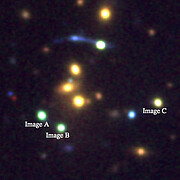