Though there are now many hundreds of confirmed exoplanets known, the number of exoplanet host stars that also have stellar companions is not well known. It is important to understand such binarity (or multiplicity) because this can have a profound effect on the way in which planets form and interact with one another. It is particularly important to examine the binarity of host stars that harbor a giant planet in a highly eccentric orbit since these are more likely to have had a dramatic dynamical history where the other star may have disrupted the orbit.

New research by Stephen Kane (San Francisco State University) and collaborators shows that planets on highly eccentric (very non-circular) orbits are not necessarily explained by the presence of an additional star still present in the system. The observations that lead to this conclusion used the Differential Speckle Survey Instrument (DSSI) on the Gemini North telescope to rule out stellar companions to four known exoplanet host stars by obtaining high resolution images of the planet host stars and searching for very close stellar companions. These four stars were chosen because the eccentric planets in those systems also exhibit signs of being perturbed by an additional body. Ruling out stellar companions greatly implies that it is an additional planet rather than a star that is responsible for the non-circular orbit, one that is lurking beyond view.

In addition to the Gemini result described above, the work also used data from the High Resolution Echelle Spectrometer (HIRES) on the Keck I telescope to confirm that one of the systems does indeed harbor another planet. The planet is the second planet found orbiting the star HD 4203 and so is called HD 4203c. Together, these results represent a significant advance in understanding the dynamical interactions of planets with eccentric orbits. Full results will appear in and a preprint is now available at astro-ph. 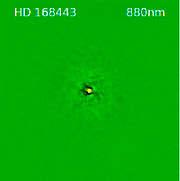 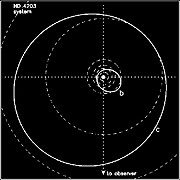