Testing the idea that the powerful radio galaxies (PRGs) are triggered in galaxy interactions, Cristina Ramos Almeida, Clive Tadhunter (University of Sheffield, UK), and collaborators obtained deep imaging data using the Gemini Multi-Object Spectrograph (GMOS) at the Gemini South telescope to study the morphologies of a complete sample of 46 intermediate redshift (0.05<z<0.7) PRGs. In what represents the first systematic imaging study of a major sample of radio galaxies using an 8-meter-class telescope, the team searched for signs of nearby companions in the 2Jy southern radio galaxy sample to look for secondary nuclei, shells, and extended low surface brightness features such as tidal tails and bridges.

The observations show that 78-85% of this complete sample of PRGs present peculiar morphologies at relatively high levels of surface brightness (μv = 23.6 mag/arcsec2). This fraction of distorted morphologies is much higher than for radio quiet ellipticals at similar sample brightness level, implying that galaxy interactions are likely to play a key role in the triggering of AGN/radio activity. The morphological peculiarities of the galaxies include tails, fans, bridges, shells, dust lanes, irregular features, amorphous haloes, and multiple nuclei (Figures 1-3), which are likely the result of the merger or close encounter of galaxies in pairs or groups. For more than one-third of the sample, the morphologies are consistent with the galaxies being observed after the first peri-center passage but before the final coalescence of the merging nuclei. If radio galaxies are indeed triggered in galaxy mergers, it does not happen at a unique phase of the merger. Moreover, since we do not know the relative velocities of the galaxies, it is not possible to rule out the idea that the activity in some galaxies has been triggered in galaxy encounters that will not eventually lead to a merger.

Dividing the sample on the basis of the optical spectra, the team finds that only 27% of the galaxies with weak optical lines show clear evidence for interactions, in contrast to 94% of the strong-line radio galaxies (SLRGs) that appear to be interacting. This result is consistent with the idea that Bondi accretion of hot gas from the X-ray corona fuels many WLRGs. However, the evidence for interactions and dust features in a fraction of them indicates that cold gas accretion cannot always be ruled out. 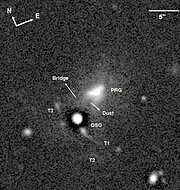 PR Image geminiann10014a
Example of the detection of tidal tails 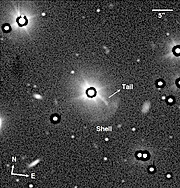 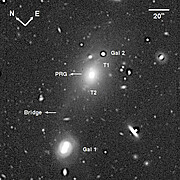