The Spitzer Space Telescope survey of the central plane of the Milky Way Galaxy revealed an unusual feature of some massive star forming regions in the galaxy: areas of extended emission that appear to have enhanced flux at 4.5 microns (which is usually assigned the color green when constructing three-color images from Spitzer data). These so-called “green fuzzies” (or “extended green objects”) were previously associated with massive young stellar objects (MYSOs) in star forming regions, but the exact origin of the emission could not be determined from the images alone.

In one source, known as G19.88-053, the new NIRI data revealed that the enhanced 4.5 micron emission arises from a prominent molecular hydrogen emission line in its spectrum (geminiann10010a and geminiann10010b). The H2 is concentrated in compact knots that are associated with an outflow around the central MYSO. Shocks heat the molecular gas to temperatures of ~2600 K.

However, another “green fuzzy,” associated with a different star-forming region, did not show any emission lines in its NIRI spectrum. The central MYSO of G49.27-0.34 is deeply embedded in surrounding gas and dust, as deep CO absorption in the spectrum indicates. The dust alters the emergent spectrum of both the central source and the surrounding gas and dust, suppressing emission at shorter and longer wavelengths corresponding to blue and red in the false-color Spitzer images (around 3.6 and 8.0 microns), and resulting in the “green” appearance. 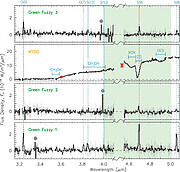 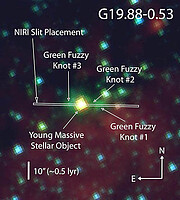