No Lithium-6 in Exoplanet Host Stars

A team led by Ph.D. student Luan Ghezzi of the Observatorio Nacional Rio de Janeiro, Brazil, has established that there is no detectable amount of Lithium-6 in five stars that host extrasolar planets. The team used the bench High-Resolution Optical Spectrograph (bHROS) on Gemini South to make the observations.

One of the interesting properties of stars known to host giant planets is that these stars are systematically metal-rich (by about ~0.2 dex) relative to field dwarfs not known to harbor giant planets. Two hypotheses have been proposed to account for this excess of elements heavier than hydrogen or helium: primordial enrichment or pollution. The first process indicates that the probability of forming giant planets is a steeply rising function of the intrinsic metallicity of the gas which gave rise to the birth of the star and its planets. The pollution scenario, on the other hand, proposes that during the inward migration of giant planets, solid material from a protoplanetary disk is accreted into the convective envelope of the host star. As this material is depleted in H and He, the star's metallicity (at least at its surface) would be enhanced.

The possibility that a planet-hosting star has accreted significant amounts of metal-rich material can be tested using the two stable isotopes of lithium. Both Li isotopes are destroyed at relatively low temperatures (T= 2x106K for 6Li and 2.5x106K for 7Li) inside stars. During the early stages of the evolution of solar-type stars, deep convection destroys most, or all, of the primordial lithium, with 6Li being destroyed much more efficiently than 7Li. The fraction of Li destroyed is a strong function of the stellar mass, with 6Li being completely destroyed, even in stars where significant amounts of 7Li is preserved. The ultimate point of the scenario is that one should not expect to find any 6Li in solar-type stars; so any positive detection of 6Li could be a strong indication of external pollution.

Using the bench High-Resolution Optical Spectrograph (bHROS) on Gemini South, high-resolution (R=150,000), high signal-to-noise (S/N=700-1100) spectra were obtained for 5 stars which host extrasolar planets. Detailed profile-fitting of the Li I resonance doublet at 670.78 nm revealed no detectable 6Li in any of the sample stars. In Figure 1 we show the BHRoS spectrum of target HD82943 as well as model profiles calculated for different 6Li/7Li isotopic ratios. The derived upper limits to the 6Li fraction in these stars are quite small, being typically less than 6Li/7Li < 0.02-0.03. These upper limits can be translated into limits on the amount of accreted material and show that less than about 0.25 to 0.70 Jupiter masses of metal-rich material has been accreted by these particular stars with planets. 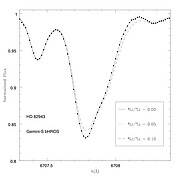