A “new” star appeared in the constellation of Orion in late 2003 when the young pre-main sequence star V1647 Orionis went into outburst. The eruption and huge increase in brightness of the object resulted in the appearance of a reflection nebula called “McNeil’s Nebula,” named after the amateur astronomer, Jay McNeil, who discovered the object and alerted the world.

During the outburst the star and nebula remained bright for approximately 18 months before fading rapidly over a six month period. By early 2006 the star and its environment were very similar to their pre-burst stage. The event was monitored and observed with many ground- and space-based facilities and Gemini Observatory played a key role in monitoring the event during its eruptive and quiescent phases. A team led by Colin Aspin (IfA/University of Hawai‘i), Tracy Beck (STScI) and Bo Reipurth (IfA/University of Hawai‘i) spearheaded the monitoring campaign of this unique event.

The eruption of V1647 Orionis is most likely associated with a mass dumping of the inner regions of a heated circumstellar disk onto the young stellar photosphere. The spectacular flaring in brightness of the object is due to a significant increase in accretion luminosity and the clearing or destroying of surrounding dust by an energetic wind that made the star visible. These eruptions are thought to be repetitive and indicative of periods when a significant fraction of the final star’s mass is accreted.

The Gemini observing campaign led by Aspin has revealed some interesting results, particularly for the quiescent period. These include:

In a previous article on V1647 Orionis, Aspin studied a previous outburst of the star which occurred in 1966. It seems that perhaps V1647 Orionis ‘wakes up’ every 37 years but soon (after 1 to 2 years) tires and takes another long nap! 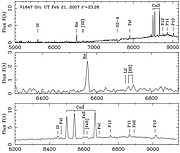 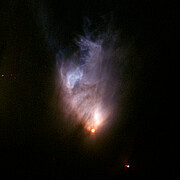