International team of North American and European scientists has just published the first set of spectra of high- redshift supernovae based on the Supernova Legacy Survey (SNLS) conducted with MegaPrime/MegaCam at the Canada-France-Hawaii Telescope. The results impact our understanding of dark energy, and have appeared in two scientific papers led by D.A. Howell (University of Toronto) and another by P. Astier (LPNHU, Centre National de la Recherche Scientifique (CNRS) and Universitis Paris VI & VII). A large fraction of the supernova spectra have been obtained with the Gemini telescopes.

SNLS uses Type Ia supernovae as standard candles to study the acceleration of the universe. Programs are underway at Gemini and other large telescopes to characterize the dark energy driving this expansion by measuring its average equation of state, w = p/ρ. Dark energy is a new, unaccounted-for form of energy that opposes the self-attraction of matter (due to gravity) and accelerates the expansion of the universe. The equation of state defines the time dependence of the dark energy density. The goal of the SNLS is to obtain 700 well-observed Type Ia supernovae in the redshift range between 0.2 and 0.9 to increase the statistical significance for values of w.

The SNLS uses the Canada-France-Hawaii Telescope Legacy Survey imaging data for supernova discoveries and light curves. Over the course of a year, four fields are imaged every four days. New supernova candidates are discovered throughout the months as light curves are being built. Then, 8- and 10-meter class telescopes are used to do follow-up spectroscopy to confirm the identity of the supernovae and determine their redshift. Gemini North and South generally observe the faintest, highest redshift (z > 0.6), where the unique nod-and-shuffle mode on the Gemini Multi-object Spectrograph (GMOS) provides a reduction of sky line residuals in the red part of the spectrum. Typically, candidates are sent to Gemini only if they are in the magnitude range between 23 and 24.5. Lower-redshift candidates are generally observed with the Very Large Telescope, Keck and Subaru Observatories.

Observations for the SNLS are executed in queue mode at Gemini, which allows astronomers to specify the desired observing conditions. Spectra are obtained with image quality better than 0.75 arcseconds and photometric conditions. Gemini data are usually delivered within a day or two of the observations, and the team performs “real-time” reduction of the spectra. Ninety percent of Type Ia supernovae were observed within 0.5 magnitude of maximum light, and over half of them were observed within 0.1 magnitude of maximum brightness. It is clear that the flexibility provided by queue observing plays a significant role in optimizing the efficiency of the spectroscopic classification of targets in the SNLS.

In the first year, 71 % of candidates have been confirmed as Type Ia supernovae, compared to 54 % using the methods of previous surveys. The median redshift of the Gemini Ia supernovae is z = 0.81. Over the five-year course of the survey, using well-proven selection methods tested on Gemini, the team hopes to add ~ 170 more confirmed Type Ia supernovae than would have been possible using previous methods, and aims to spectroscopically observe ~ 1,000 supernova candidates during the whole SNLS project.

This is a large, on-going program and cosmological fits to the first-year SNLS Hubble diagram give the following results: ΩM = 0.263 ± 0.042 for a flat ΛCDM model; and w = -1.023 ± 0.090 for a flat cosmology with the constant equation of state w, when combined with the constraint from the recent Sloan Digital Sky Survey measurement of baryonic acoustic oscillations. After only two years of operation, the SNLS has already demonstrated its advantages over all previous ground-based supernova surveys. 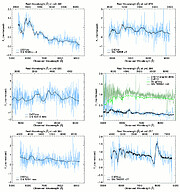 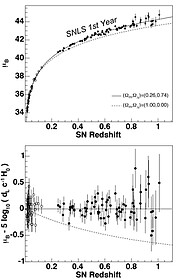 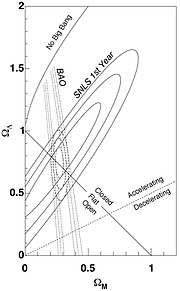