A nine-hour exposure of the McMath-Pierce Solar Facility on Kitt Peak. The normally white building appears red due to high altitude haze following the 1991 eruptions of Mount Pinatubo. No filters or multiple exposures were used. Credit: Bill Livingston & NOAO/AURA/NSF.

Visit the NOAO news release for more photos and videos

A new $4.5 million grant from the National Science Foundation (NSF) has been awarded to the Association of Universities for Research in Astronomy (AURA) for the development of a new “Windows on the Universe Center for Astronomy Outreach” at NSF’s Kitt Peak National Observatory. Located in the McMath-Pierce Solar Telescope facility, an iconic structure that was once the world’s largest solar observatory, the center will provide the public with a new way to experience the cutting-edge research being carried out at Kitt Peak and NSF’s other astronomy facilities around the globe, including ground-based optical, radio, solar, and gravitational wave facilities.

New Windows on the Universe for the Public

The grant will fund the renovation and transformation of the McMath-Pierce into an astronomy visualization and presentation center with potentially global reach. The center will feature data visualization systems, interactive exhibits, and a simulated telescope control room, which will give visitors the virtual experience of being at a telescope and participating in research carried out at NSF facilities around the world, including those in Hawaii, Chile, and the South Pole.

To highlight its location in the McMath-Pierce facility, the Center will feature special exhibits on the history of solar astronomy. The grant will also fund public programs, including educational programs to be developed in collaboration with the Tohono O’odham Nation. Kitt Peak National Observatory, which is located in the Schuk Toak district on Tohono O’odham Nation land, 56 miles west of Tucson, Arizona, is part of the National Optical Astronomy Observatory (NOAO), which is operated by the AURA under an agreement with NSF.

The visualizations created for Windows on the Universe will feature imagery from these NSF facilities and will be designed for export to compatible visualization centers around the world, expanding the center’s reach. “The mountain-top setting in Arizona will provide visitors with a unique exposure to the history of astronomy at Kitt Peak, and it will serve as a gateway to the science taking place at NSF facilities in remote sites around the world,” said NSF Program Director James Neff.

New Mission for an Iconic Facility

Recently retired as a scientific research facility, the McMath-Pierce Solar Telescope, with its striking and unique architecture, will be repurposed for astronomy outreach. Dedicated in November 1962, the McMath-Pierce made important scientific discoveries about the Sun, planets, and the Moon over its 55-year research career. It was once the only solar telescope capable of observing the Sun at infrared wavelengths, and it has a long history of contributing to instrumentation development for both solar and night-time astronomy.

The McMath-Pierce now turns to a new mission focused on astronomy outreach and education, in an ambitious transformation of a research facility into a state-of-the-art outreach center. The center is expected to open to the public in about two years.

Lori Allen, Director of Kitt Peak National Observatory, expressed the excitement surrounding the new initiative: “We are thrilled to write this new chapter in the life of the McMath-Pierce. The new outreach center will greatly enhance the visitor experience on Kitt Peak, providing new and better ways for families, school kids, locals, and travelers from around the world to tap into the wonders of the universe and the beauty of the night sky.”

The development and operation of the new center will be led by the Kitt Peak Visitor Center and its manager, Bill Buckingham. NOAO’s Education and Public Outreach group will partner in developing new educational programming for students and teachers. Staff from NOAO and other NSF astronomy facilities will be invited to help develop exhibits that showcase results from their respective facilities.

Describing the evolving scope of the Kitt Peak Visitor Center’s mission, Bill Buckingham explained, “Kitt Peak has welcomed visitors and students for decades with its programs that describe Kitt Peak research and general astronomy. With the new outreach center, we’ll take a quantum leap beyond that, broadening our narrative to include all of NSF-funded astronomy, making the Sun and night sky accessible, enjoyable, and educational to many more visitors than is possible today.”

Kitt Peak National Observatory (KPNO) is part of NSF’s National Optical Astronomy Observatory (NOAO), which is operated by the Association of Universities for Research in Astronomy (AURA) under a cooperative agreement with NSF. NSF is an independent federal agency created by Congress in 1950 to promote the progress of science. NSF supports basic research and people to create knowledge that transforms the future. KPNO Visitor Center staff and volunteers are honored to be permitted to provide astronomy programs for the public on Iolkam Du’ag (Kitt Peak), a mountain with particular significance to the Tohono 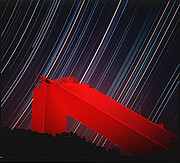